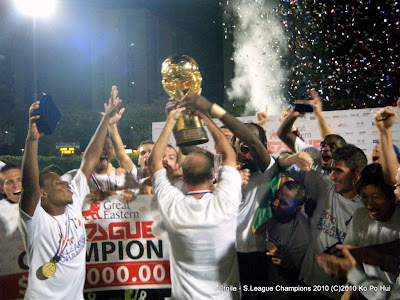 Historical night at Jurong East Stadium, debutante Etoile FC claimed their second trophy of the season by clinching the holy grail - the S.League championship (pictured above).

After suffered some early scares in the first half by trailing 2-1 to hosts Albirex Niigata (S), the French stormed back to beat the Japanese 4-2 in the end to seal the race. 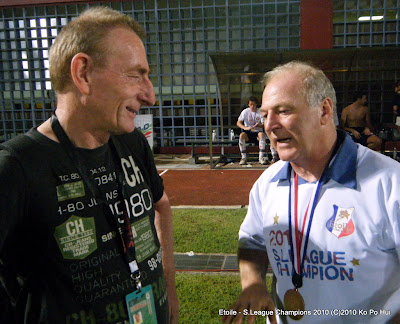 Coach Patrick Vallee (pictured above on right) claimed his second honours in his debut season with the French outfit, would he sweep the coveted "Coach of the Year" award on the "S.League Awards Nite" on the 21st November as that final piece of his jig-saw puzzle? 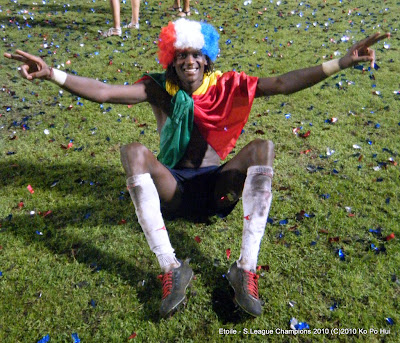 But one thing for sure is Frederic Mendy (pictured above) is set to go up to the stage to pick up this season's "Top Scorer" on the same night.

The other two results on the night saw Tampines Rovers beat Balestier Khalsa 4-1, while the "Uniform Derby" at the Jalan Besar Stadium ended with both SAFFC and Home United in goal-less draw. 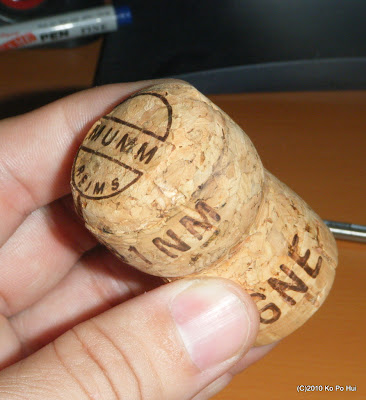 (Pictured above) Picked this up - a cork of a champagne bottle uncorked during the celebration last night.
SOMETHING TO PONDER...
Earlier, the day before I posted a question on the blog's FB wall that if Etoile's league victory, would it be seen as a success finally achieved to the league authority's "essentially-why-foreign-team-needed" policy?

Here were some feedback posted...

"Ultimately, it is the selection of the foreign teams that matter most.

I wouldn't say that Albirex is a failure eventhough they have yet to really challenge for the title. But their organisation and the players they produce have turn out to be really good.

So if etoile wins, it would mean that they are a strong foreign team, not necessarily a telling sign that foreign teams are needed in this league." - A Arep

"I think it will be a kick in the ass for the local clubs in the sleague, sometimes, it hurts, but truth it, some points we are not good enough

I think to take it positively , its lessons learnt then title lost

If tamp and home were consistent enough, they wld have already sewn up the title, most important, the future generation of local players can only benefit.

That's the biggest plus point." - B Khoo

Email ThisBlogThis!Share to TwitterShare to FacebookShare to Pinterest
Classifed as: foreign teams, sleague