By Ko Po Hui March 11, 2011
(Media Information by the Football Association of Singapore) 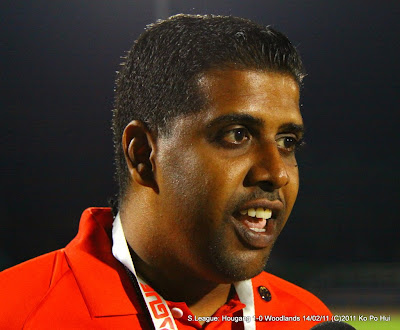 SINGAPORE, 11 March 2011: The FAS Disciplinary Committee convened on Thursday 10 March 2011 with regard to the charges against Woodlands Wellington head coach R. Balasubramaniam (pictured above).

Balasubramaniam had been charged for breaches of misconduct after the Great Eastern – YEO’S S.League match between Woodlands Wellington Football Club and Albirex Niigata FC at the Woodlands Stadium on 21 February 2011.

Having investigated the incident and having considered all the relevant facts and circumstances, the Disciplinary Committee came to the following decision:
Disciplinary Committee Chairman K. Bala Chandran said: “The FAS Disciplinary Committee takes a serious view of such actions. However Balasubraniam has expressed his regrets and has apologised unreservedly. As this is the first time he was asked to appear before the DC, we believe that the punishment meted out is sufficient”.