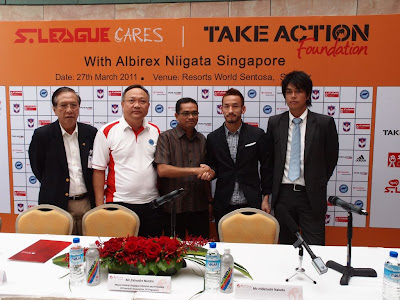 Among the events lined up in the coming week include a Gala Dinner on Thursday, 31st March at Resorts World Sentosa and a Charity Match between the S.League All-Stars and TAKE ACTION With Albirex Singapore Selection side at Jalan Besar Stadium on 2nd April.

A host of Japanese footballing royalty, including former internationals Hidetoshi Nakata, Masaaki Sawanobori and Masakiyo Maezono have confirmed their participation for the TAKE ACTION with Albirex Niigata Singapore Selection side.

The S.League All Stars are coached by three-time S.League Coach of the Year, Richard Bok of SAFFC, who will pick a team consisting of local and foreign S.League stars. Richard Bok would be assisted by another Singapore football stalwart, S.Subramani, of Home United.

The Gala Dinner, hosted by Nakata, will see guests having a sit down formal dinner with the Japanese superstar. Nakata has also generously donated memorabilia which will be auctioned at the dinner. Guests could also auction for a “Bench Seat”, a once-in-a-lifetime chance to sit with Nakata and other Japanese stars at the bench during the Charity Game on 2nd April 2011.

Guests can purchase a seat to attend the dinner. They can email the Football Association of Singapore through info@fas.org.sg to get more information about the dinner.

All proceeds raised from the fund-raising events, including the Charity Match will directly support the Japanese earthquake and tsunami relief efforts.

“We have seen the earthquake and tsunami render unimaginable damage on the lives of our Japanese friends,” said FAS President Zainudin Nordin.

“Many have already given generously to support the ongoing relief efforts and we are also doing our part, through the S.LEAGUE CARES, TAKE ACTION WITH ALBIREX NIIGATA SINGAPORE series of events.”

“Given the Great Eastern-YEO's S.League's close association with Albirex Niigata Singapore and their steadfast support of the FAS since the club's debut in the competition in 2004, it is only right that the S.League is showing support and solidarity to its Japanese brothers.”

“We have always maintained close ties with the Japanese community through Albirex and we want to present a camaraderie that can only be found in football.”

On 11th March, a massive 9.0-magnitude earthquake occurred near the north-eastern coast of Japan, creating extremely destructive tsunami waves which hit Japan after the earthquake, and triggering evacuations and warnings across the Pacific Ocean.

The earthquake and tsunami have caused extensive and severe damage in north-eastern Japan, leaving thousands of people confirmed dead, injured or missing, and millions more affected by lack of electricity, water and transportation.

In addition to Albirex Niigata Singapore, other S.League clubs have also done their part for the Japanese earthquake relief efforts with Home United, Courts Young Lions and 2010 S.League Champions Etoile donating proceeds from their matches.

Football fans who attend the match can contribute to the relief fund through Red Cross donation boxes which will be placed around the stadium.

Tickets priced at $12 (Grandstand) and $6 (Gallery) for the S.LEAGUE CARES, TAKE ACTION WITH ALBIREX NIIGATA SINGAPORE Charity Match will go on sale from Thursday, 31 March at the Albirex Niigata Singapore office at Jurong East Stadium and the FAS office at Jalan Besar Stadium. VIP tickets will be sold at $200