LION CITY CUP is BACK!!

By Ko Po Hui March 07, 2011
(This entry is formulated based on and partly extracted from the press release issued by The Red Card Group) 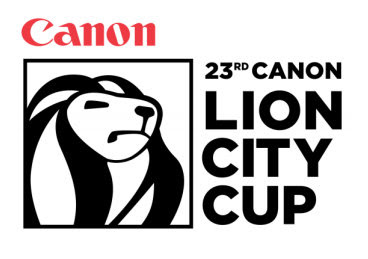 Tournament logo extracted from the press release made available
The tournament that churned out the names like Fandi Ahmad, V Sundramoorthy and Indra Sahdan Daud, who went on to represent Singapore national team since its inaugural back in the late 1970s, will make its return this coming June.

Last held in 2009, the year's tournament will see renowned Japanese imaging and optical products manufacturer Canon as the title sponsor of the 23rd edition of this tournament, which is credited for being the inspiration behind FIFA’s introduction of the World Youth Under-17 and Under-19 Championships.

"Nurturing the next generation of athletes is crucial for a sporting country like Singapore. Canon has always been a firm and long-term supporter of sports.” said Mr Andrew Koh, Senior Director and General Manager of the Consumer Imaging & Information Products Division at Canon Singapore, in expressing his company's delight to be part of this tournament.

"From supporting the Singapore National Olympic Council to Singapore Bowling over the last few years, Canon believes that it is important to provide a platform like the Canon Lion City Cup for our local athletes to compete with the best." added Koh in the media release issued to the media.

The Football Association of Singapore (FAS) president Mr Zainudin Nordin is confident that the return of the Lion City Cup will once again see the crowds flock back to Jalan Besar Stadium like during those YOG matches played in last August.

"In August last year, Singaporeans from all walks of life came out in full force to support our Cubs and I’m sure that the love affair will continue as they enjoy the world-class youth football action on this display at this year’s Lion City Cup." said Mr Zainudin, who is also the mayor of Central Singapore CDC.

The event will be co-organised by The Red Card, a regional sports marketing agency, and the FAS.

"We want to re-ignite the passion Singaporeans have for football – the same passion that filled the stands when our YOG boys beat Montenegro in their bronze medal match. We believe that the Lion City Cup is the perfect tournament to do so." said R Sasikumar, the Managing Director of The Red Card, who have been awarded the commercial rights holders by FAS for the event for the next three years (2011, 2012 & 2013).

"Commercially, we feel that the project offers great value to our partners to be involved in the event. Our aim is to build a tournament that will eventually see the best youth teams in the world bring their style of football to our soil." added the former national defender.

The tournament will be held from 18 to 27 June at the Jalan Besar Stadium and featuring teams like of Everton FC (England), Juventus FC (Italy), Benfica (Portugal) and CR Flamengo (Brazil).

Representing Singapore will be the Under-15s, and the Singapore 2010 Youth Olympic squad, who won the bronze medal at last year’s inaugural games. These six teams will be battling it out for honours over the span of ten days.

BLAST FROM THE PAST... 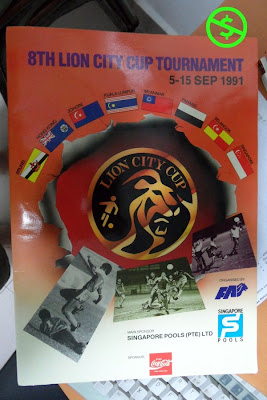 I thought I had dumped this souvenir magazine (pictured above) long time ago, until I unearthed from the rumbles during the renovation work carried out at my place months ago.

This is a souvenir programme booklet given out in the 1991 Lion City Cup tournament, which was held at both (old) Jalan Besar Stadium and Toa Payoh Stadium (within my reach) and if I'm not wrong Singapore met Burma in the final played at the Toa Payoh Stadium.

On that night out with a group of schoolmates, it was clear that the pace and aggression of the Burmese had overpowered our boys that eventually won them the Cup in front of packed capacity stadium (considered this was only a schoolboy tournament!).

Years later, I was at the (old) Jalan Besar Stadium for another edition's final and saw the likes of Indra Sahdan, Ahmad Latiff and Yazid Yasin played against the team from Hong Kong and won (I think).