I must admit that sometimes some of my entries, comments may not be "music" to everyone's ears, but I believe these are my mere expression of opinions and thoughts.

Which is why as a thumb of rule, I always remind myself not to go overboard with the usage of words and phrase that might be uncomfortable to the others.

It's not the fact that I fear to incur any wrath of others that might jeopardize my blogging career, rather it's because I believe there's not point of being aggressive and impose your thoughts to the others without conviction.

At the meantime, I would be glad if the other parties would take some of my comments and feedback positively (which I'm glad that most of them do). 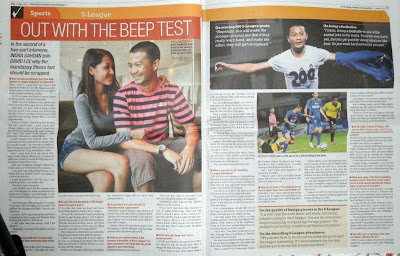 Had those above-mentioned thoughts, when I got some quibbles in the morning that TNP published some news article that had SAFFC striker Indra Sahdan Daud (pictured above) and Hougang United coach Aide Iskandar voiced out some issues regarding the S.League.

For Indra's case, he highlighted that it's time to do away with the mandatory "beep test" that has always seen as a stumbling block that had some good players not able to play in the league because they failed the test (ex-Stags Sead Muratovic, Mirko Grabovac, etc.) and the issue on having foreign teams in the league set-up. 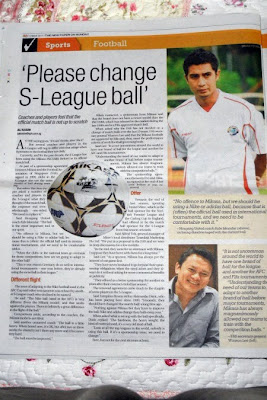 Whereas on the Aide's case (pictured above), the former Lions skipper urged it's high time to replace the type of ball currently used in the League, as many echoed that the current Mikasa PKC55BR "is not up to scratch".

This prompted a reply from FAS secretary-general Winston Lee, who was reportedly said in the pictured article that the "Mikasa footballs are approved by Fifa and thus, meet the performance criteria of the world football governing body."

When this news was surfaced, I saw some of the tweets pertaining the acceptableness of the ball by the Japan sporting equipment suppliers.

"I felt the mikasa ball was one of the best I've ever kicked in my life. A... is too bouncy, N... is too light, i kick mikasa ball, i can kick 3/4 of a pitch. The feel is different" said the pro-Mikasa user.

"...it's too heavy and players need to use alot of strength to make a firm pass" said one user who has a different opinions of the Mikasa ball.

"Mikasa is the hardest ball to head, gives me dizzy spells after that. (the two 'other brands') has cushions" complained another on the twitter.

But whatever it is, the fact is that Mikasa will continue to be official ball supplier to the S.League for the next six years according to the pictured article, which also contained some queries why the same model for the past 10 years that the concerned party is not able to give a convincing answer.

My Thoughts
While the official match ball is a approved FIFA model, but with the overseas tournaments and some of our neighbouring leagues using those model supplied in major tournaments such as the World Cup, shouldn't we try to keep in line with that? So that our players will not lose out because of the adaptivity issues of the ball in situations as such.

It should be seen as a positive feedback when all stakeholders from the players, officials and fans having something to say and those recipients should be ready to "listen and absorb" before making a reply to those comments.
logged down by Ko Po Hui at 15:57:00