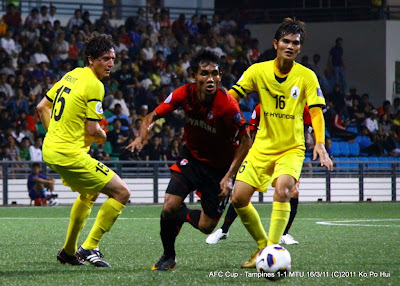 Tampines Rovers (in yellow) gave themselves a good account against their much-fancied Thai opponents, Muangthong United (in red top), in this AFC Cup Group G encounter at the Jalan Besar Stadium.

The Stags managed to absorb the Twin-Qilins' slow turbo play up front, while catch them on the break, which worked in 23rd minute when veteran Aleksandar Duric finished off the ball in the box following a latched-on pass off a Hassan Sunny's drop-kick. 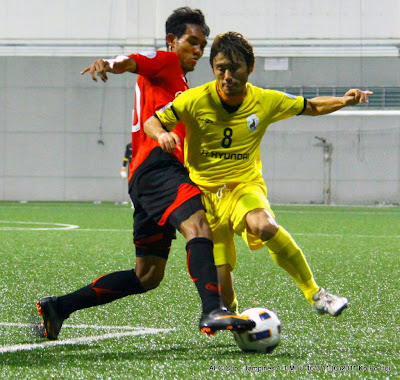 But the hosts' joy was short-lived when Choeichiu Phichitpong's 25m top-corner shot blasted the roof of Hassan's goal in the 31st minute to stunt the close to 2,000 crowd at the ground. 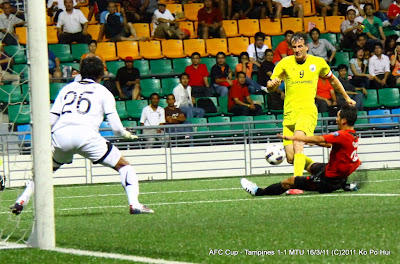 It was even-stevens with the game proceed into the second half and Duric was guilty to miss a few clear-cut chances that were defused by the Thai defence (as pictured above).

With clock ticking away, it was clear that both sides would be pleased with a draw that possessive play dominated the later stages on the game till the final whistle was blown by referee Jahanbazi Yadollah of Iran. 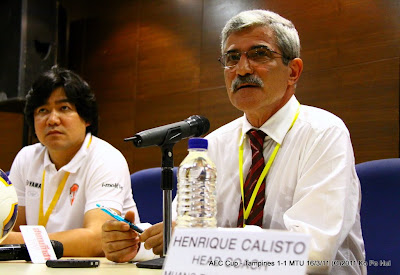 Understandably, Muangthong's coach Henrique Calisto (pictured above right) was unhappy with the outcome which he felt Duric's opener was the result of some slackness at the back of his defence.

"If you asking me if I'm satisfy (with the result), I can tell you I'm not satisfy." said the former Vietnamese national team coach after the match.

"With the players we have, I think we can play better and more intensity game and cannot allowed the first goal (by Duric), which was a crazy mistake due to the lapse of concentration. 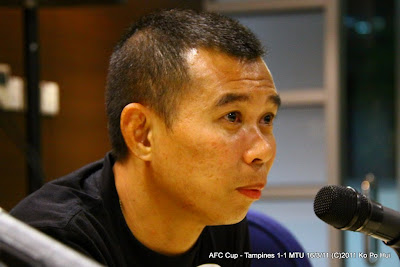 Tampines coach Steven Tan (pictured above) felt both sides dominated one half each for themselves during his address to the media.

"Basically, it's a tale of two halves with first half belong to them (Muangthong) and second half we thought we could win with the chances we had that I think one-all would be fair result." said the former national winger.

"It's everything to play for this group, as we have Hanoi T&T home and away that these two games play a part in decide who progress to the next round." commented coach Tan in his assessment for the remaining AFC Cup fixtures.

FOR MORE OF THE MATCH PHOTOS, PLEASE CLICK HERE.