(P.S: The copyrights of the images and videoclip depicted in this blog entry belong to Nike.)

Launched at the newly introduced Nike Players Lounge in Nike Wisma, the tournament celebrates the global diversity of football and inspires local youths to Write Their Future 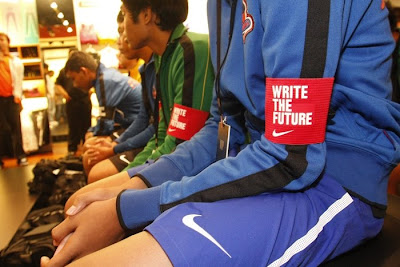 The theme of the tournament - "Write The Future"
SINGAPORE (21 May, 2010) – In an effort to celebrate the global diversity of football this summer, Nike Singapore launched the Nike Cup Singapore 2010 to inspire youths to compete and be crowned city champions. Calling upon aspiring athletes aged 14 to 19 years old, Nike Cup Singapore is a fast paced five-on-five football tournament set against the urban backdrop of the Lion City, which will see more than 3,000 young footballers battle it out for a chance to experience a 5-day, all-expense paid football training experience in Rio de Janeiro, Brazil.

Instead, all they had was sheets of newspaper bundled up in tape (as a ball), with any open space as their pitch.

Glenn Heng, Marketing Manager, Nike SEA & Singapore, said, “With the launch of the Nike Cup Singapore and Nike Players Lounge, we are giving youths access to exclusive and meaningful football experiences as we aim to inspire them to write their future.”

Highlighting the reasons behind launching the Nike Cup Singapore this year, he added, “With a focus on 40 cities in 28 countries, Nike is igniting a global celebration of football as we head into sport’s biggest event this summer. Nike Cup Singapore aims to amplify football with local elements that celebrate the identity of our city and give our youths an unforgettable tournament experience.” 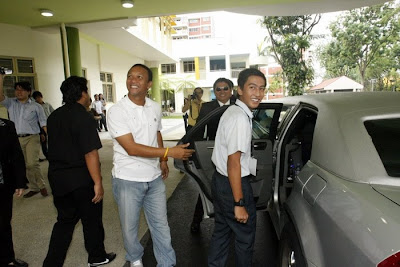 Former national skipper Fandi Ahmad picked up one of the school teams' skipper from his school. 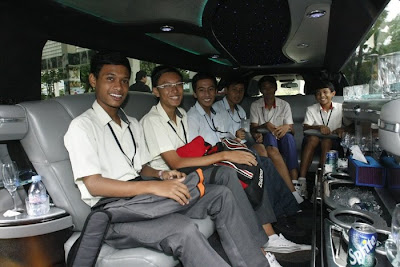 An unforgettable moment for these school team's captains
As part of the launch today, Singapore’s top 30 school football captains were invited to enjoy an exclusive VIP experience which began with a special surprise pick up from their schools by prominent ex-National captains Fandi Ahmad, Nazri Nasir, Indra Sahdan, Aide Iskandar, David Lee and Terry Pathmanathan.

They were whisked away in luxurious stretch limousines to the Presidential Suite at the five-star Mandarin Orchard, where they were kitted in the finest Nike apparel and enjoyed a taste of the life of a football superstar.

Rounding off the experience, the young captains were then escorted to the Nike Players Lounge at Nike Wisma. Emcee Mark Richmond got the ball rolling by introducing them to one more special guest – Lions coach Raddy Avramovic. 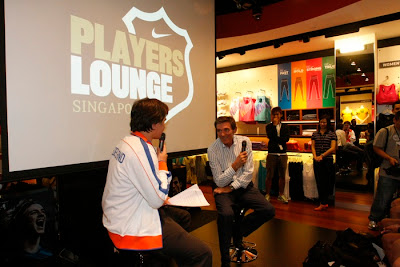 National coach Raddy Avramovic (righted of screen in long-sleeved shirt) shared his thoughts on the essence of being a good player with event emcee Mark Richmond.
The captains were able to learn from Coach Raddy, as he shared his thoughts on the essence of being a good leader, emphasizing, “The captain should not be chosen by the coach, but by the players. He should be someone that can be depended on to not just lead them on the field, but off it as well.” He also highlighted what it took to be a great player, and said that he hoped to see some of the young faces in the S-League soon. “You must work hard, sacrifice, and love the game. Most importantly, you must always remember to take your chance when you can.” 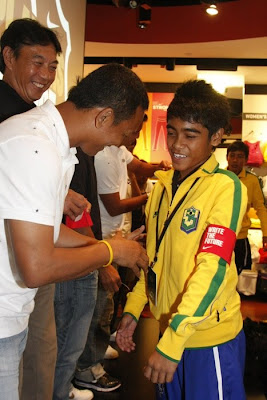 The legends of Singapore football reunite to meet the young talents of football today - Fandi Ahmad hands a Write the Future armband to an excited school football captain as former National goalkeeper David Lee looks on
The young players also enjoyed the honour of being handed exclusive Write the Future armbands by the six former National captains, who passed the torch on to the next generation of football stars. Each school captain was also given an elite membership card for the Nike Players Lounge and 10 invitation cards for other football lovers to gain access to the lounge.

“It has been an unbelievable experience to have received all this, and to have met some of Singapore’s football legends. It’s a great honour that Nike has given all of us, and I really feel inspired to do more as a football captain,” said Hilmi bin Amirshariffuddin, 16, of Regent Secondary School.

Hilmi was no doubt inspired and also entertained by tales from the ex-National captains, who gave their thoughts on how football was played back then, compared to how the youths today play it. To a chorus of laughter, Fandi reminisced about the days he used to play on a basketball court, with 30 players charging after a small plastic 30-cent ball. 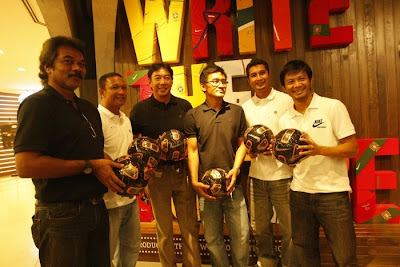 Echoing Fandi’s sentiments, Terry shared that they did not have the luxury of a plastic ball in his time. Instead, all they had was sheets of newspaper bundled up in tape, with any open space as their pitch. Younger ex-captain Indra acknowledged that players of his generation had better access to facilities, but noted that kids today enjoy even greater benefits from technological advancements. He explained, “They can learn the moves of their favourite players on popular digital mediums like YouTube and even Nike Football+, which gives players access to tips from the top clubs and players in the world.”

With these colorful examples of how the beautiful game has been – and still is – played in Singapore, the young captains were invited to take part in the Nike Cup Singapore 2010, which kicks off recruitment today and is free-of-charge to participants. Players will need to form a team of five (plus one reserve) to compete in the no referee, no goalkeeper game which is based on honor rules. 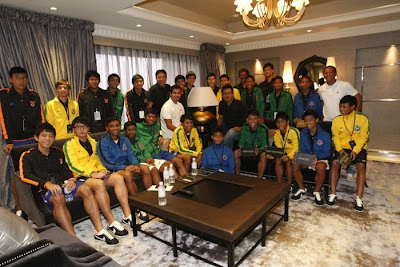 VIP treatment at Mandarin Orchard
To garner the best talents locally, play-offs for the tournament will be held across the four zones (North, South, East and West) of the island. Each zone will see 130 teams battling it out for table scores and the Top 50 in each zone will be brought together for the final battle. Football youths are to form their own teams and register in either Junior (14 to 16 years old) or Senior (17 to 19 years old) categories.

Played in abandoned schools, multi-storey car parks and in the heart of Orchard Road, Nike challenges teams to relive the “Good Ol’ Days” of football in Singapore where football was played anywhere, from void decks to just an open space, using only slippers or a dustbin for the goal posts; Challenging them to conquer the city and to earn the right to call themselves the champions of urban street football.

The city champions will walk away with a 5-day, all-expense paid football training experience in Brazil as well as Nike products and a Nike Cup Singapore trophy. This exciting prize will see the winners soak up the Brazilian football culture in its many different forms. Highlights include lessons and drills at the Brazilian Football Confederation’s training centre in Granja Comary, where the Brazilian national football team trains, and a chance to strut their stuff through much-loved local football games like futsal, street futsal, turf football, and beach football.

The time has come for players to carve their name in history. One touch, tackle or free kick could crush a nation's hopes or cause them to build a statue in your honour. Drogba, Rooney and Ronaldo are ready to Write The Future
Joining is simple:

Email ThisBlogThis!Share to TwitterShare to FacebookShare to Pinterest
Classifed as: events, Videocast