(P.S: The copyrights of the images depicted in this blog entry belong to Coca-Cola.) 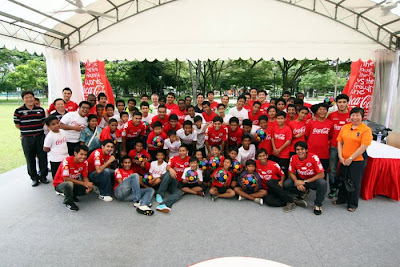 A group photo at the end of the day
SINGAPORE, 22 May 2010: Today over 60 youths from the Students’ Care Service (SCS) were put through their paces and treated to special awards and lunch at West Coast Park to celebrate Coca-Cola’s 124th Founder’s day.

Focusing on the Students' Care Service's core values of Respect, Endurance and Discipline for the youths sports programme, the Coca-Cola Kicks! Soccer Clinic was led by coaches and professional players from Home United Football Club (HUFC). SCS staff and Coca-Cola employees were also on hand to join in the fun and mentoring, emphasising the importance of life skills on and off the pitch. 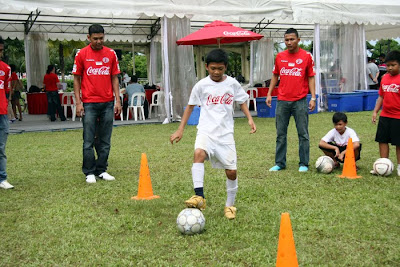 Following an intensive morning training session (pictured above), the participants took a break from drills to enjoy a skills exhibition by HUFC players. Amidst the athletic showcase of ball control, juggling, passing and heading, students were also taught the importance of positive attitude, team work and resilience.

“Coca-Cola Founder’s day is an important time to reflect on our success and give something back to the community. Every day, the Students' Care Service provides invaluable support to local youths helping them become well adjusted young adults who are ready and determined to take on life's challenges. While not everyone can be like Isa Halim and Lionel Lewis and play for the national team, sport is an important part of an active balanced lifestyle and is great for character building. I am delighted to make this presentation to help SCS continue their great work." 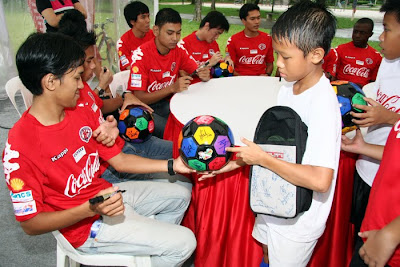 Individual participants also had photo and autograph opportunities with the HUFC players (pictured above) to commemorate the day. In addition, the top three boys in each of the three age groups who embodied the values of Respect, Endurance and Discipline were rewarded with special kit bags.

Mr Goh Chee Kong, Students’ Care Service Chairman, said: "We would like to thank Coca-Cola for their generosity and Home United Football Club for taking time out to help us reinforce that character shines more than simply winning. The vouchers will enable us to reward character excellence and give some of our youths the chance to enjoy a special shopping outing which in itself will be an experience for them. Thank you to Coca-Cola for this opportunity to have their dreams realised." 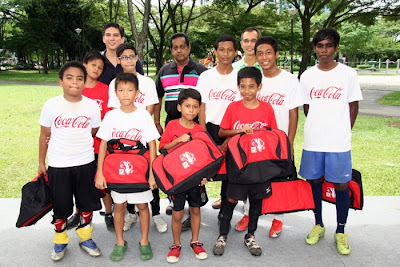 HUFC's General Manager Mr S Mahalingam (center, back row) flanked by Coca-Cola Singapore General Manager Mr Antonio Del Rosario (left) and Students’ Care Service Chairman Mr Goh Chee Kong (right) with the prize winners of the "Coca-Cola Kicks Soccer Clinic".
Mr S. Mahalingam, General Manager, Home United Football Club, said: "We have worked with our sponsor Coca-Cola on many community events over the years. It is always a pleasure to bring the team down to interact with young players and help fulfill our mission of keeping youths off the streets. The pride, determination and discipline exhibited today across all skill levels gives me great hope for the future of the sport at grassroots level. We will continue to support such activities and reach out to the community through sport."
logged down by Ko Po Hui at 23:31:00