(In collaboration with Temasek Review Sports, the following match report was written by MJ,who was reporting on behalf of the online portal.) 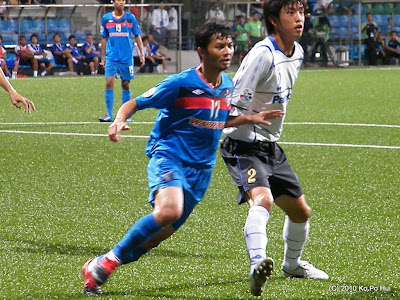 SAFFC twice equalised but eventually the match was settled by a hat-trick from 22-year-old striker Shoki Hirai. 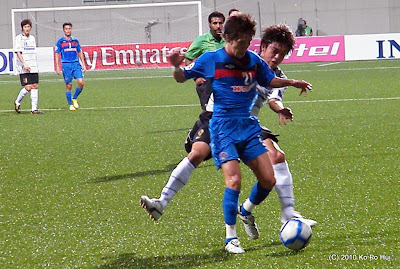 SAFFC started the match with high energy and were almost rewarded immediately in the 3rd minute when Erwan Gunawan placed a free header straight at the Gamba keeper.

Gamba Dominance
That miss proved to be costly as Gamba recovered from the early scare to score in the 7th minute when Shoki Hirai was put through by skipper Tomakazu Myojin and he coolly slotted the ball in the far bottom corner beyond the reach of the SAFFC keeper Shahril Jantan. 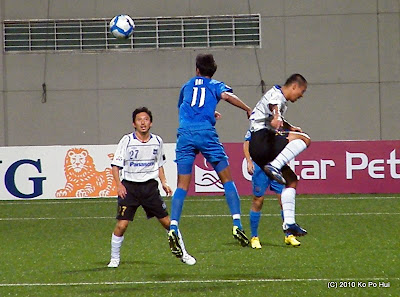 Rysh Roshan Rai (11) started in all of the Warriors ACL group stage campaign.
On the half hour mark, Erwan made amends for his earlier miss when he headed in a cross by Indra Shahdan as SAFFC pulled level against the run of play.

Barely 15 seconds after the break, Gamba regained the lead as a cross from the left was fumbled by Shahril Jantan under the pressure of the statuesque Cho Jae-Jin and Hirai headed the loose ball into the empty net. 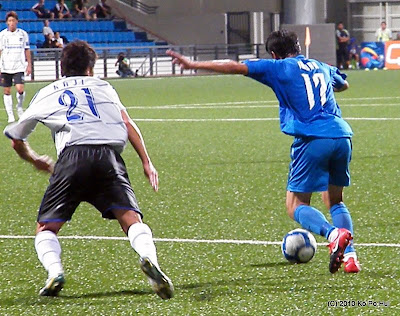 The decisive ball from Indra saw Erwan Gunawan levelled the scores for the first time in the 32nd minute.
SAFFC then worked hard to contain the onslaught of Gamba who pinned SAFFC back in their half with slick passing and movement off the ball. SAFFC got back on level terms with their only chance in the second half - Swedish defender Niklas Sandberg escaped his marker and nodded in Ahmad Latiff’s free kick after 62 minutes.

SAFFC’s belief was lifted after the goal and were determined to get a result against the J-league giants. That hope was however dashed barely eight minutes later as a poor clearance in defence was punished by Sota Nakazawa who struck an unstoppable shot from point blank range.

In the 74th minute, SAFFC’s Japanese winger Taisuke Akiyoshi was the given his marching orders from the referee after receiving his second yellow of the night and SAFFC was left to play out the remainder of the match with 10 men for the second consecutive match.

Gamba took advantage of their numerical superiority and put the tie beyond SAFFC with the impressive Hirai completing his hat-trick in the 81st minute. He beat two SAFFC defenders before beating Shahril Jantan at his near post.

Assessment on SAFFC
SAFFC’s two goals against Gamba here was the most an S-League side had ever scored against a Japanese side in a single game. All in all, S-League sides had lost five out of five against Japanese teams, conceding 21 goals in the process. 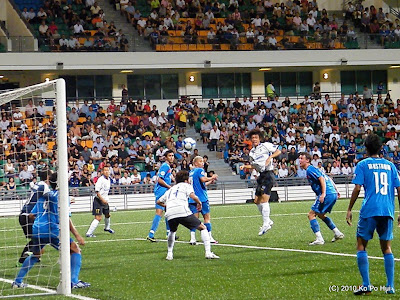 Close shaving moments as SAFFC defend a Gamba corner in the second half.
The Warriors were never expected to get a result here against the J-League giants despite a recent run of poor form by the Japanese side on their domestic front. Furthermore, they are missing three of their regular first team players, including current Japanese international Yasuhito Endo.

However, SAFFC showed that they were capable of rising to the occasion with a disciplined performance, scoring twice in the process and were level on terms with Gamba until the 70th minute. 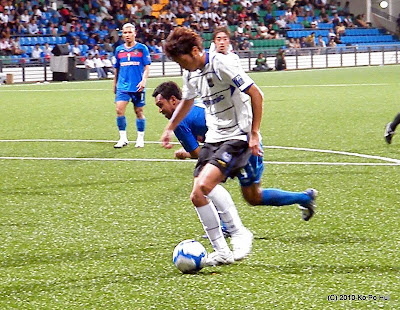 This was moment before the visiting side scored their fourth goal of the night.

Gamba struggled to settle into their normal passing game probably suffering from the humid Singapore weather and playing on the unfamiliar artificial turf at Jalan Besar Stadium. In spite of the difficult conditions, the Japanese’s class and superior technical abilities got them through this game unscathed.

SAFFC deployed a soak and strike strategy hoping to keep the Japanese at bay while trying to score on the counter. The players were committed to their tasks and were 20 minutes away from a respectable draw. 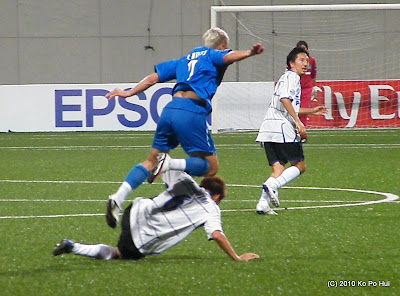 Ahmad Latiff had another good game in the ACL tournament as he played in middle of the park. 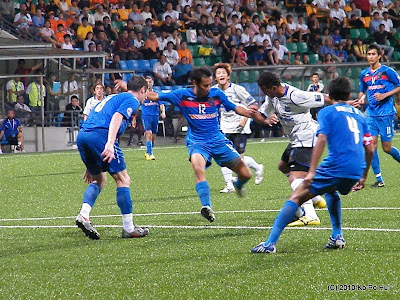 One of the only two imports Gamba brought with them to Singapore - Brazilian Ze Carlos getting close attention as he try to advance into the Warriors' box in the dying moments.
Coach Richard Bok should no doubt take heart in their performance from this game and playing at this level will definitely improve the team. With this performance, SAFFC may well be slowly but steadily inching towards their 1st AFC Champions League Group Stage win.

(I would like to say a BIG THANK YOU to Temasek Review Sports for contributing this match report.) 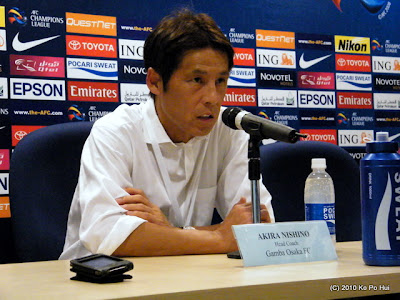 "(Shoki) Hirai had promised me he will score four goals, but he only managed three so I don't want to compliment him for that" as coach Nishino gave his assessment of his hat-trick hero performance.

On his opponent's performance tonight, coach Nishino commented "SAFFC played aggressively right from the beginning of the match, especially their no.7 (Ahmad Latiff) and it resulted us in losing our focus in the middle of the game that allowed them to equalise."

"Looking at the game from the bench's perspective, I felt we don't have a good season so far and that's why our objective of in the ACL is to achieve good results as it's a form of encouragement to the team" when asked on what it means to his team on winning tonight's match. 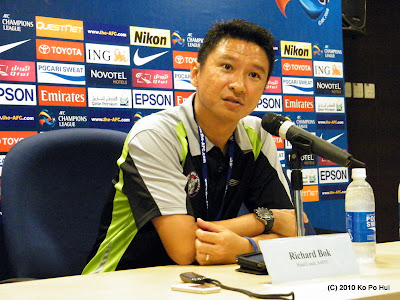 Richard Bok (pictured above), SAFFC's coach meet the media after the game.

"It's not over, as we still have three more games to play." quipped the 41-year old coach in responded to a question from the floor if the Warriors' ACL campaign is over after the loss to Gamba.

"I'm proud of the team's performance which I think we gave them a good fight, althought I felt some of decisions (by the referee) didn't went our way, especially Aki's (Akiyoshi Taisuke) first yellow card which I felt was a bit harsh."

"I think we played better football tonight as compared to our last two game, and I hope the team would transfer that kind of playing attitude into the S.League as well." added Coach Bok.

FROM A FAN'S PERSPECTIVE ON THE STAND
SAFFC's supporter Agares Kee shares in his thoughts on SAFFC playing the ACL after catching the Warriors in action. 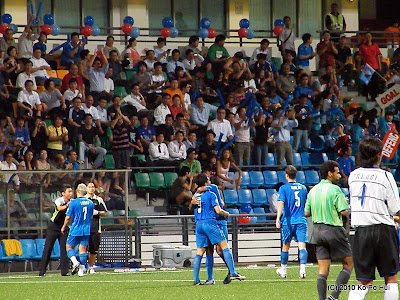 Joy!! SAFFC's players and fans celebrated after the first equalizer in the match.

"I have been a fan of a few S-League clubs, and it's always a pleasure to watch how our boys improve as years go by. The S-league has proven its worth by becoming one of Asia's Top Ten Leagues as of late, but I think there are a lot more for us to work on.

The AFC Champions League consists of champions of their own domestic league. And for Singapore, we have our very own SAFFC who made it to the prestigious competition. But are the warriors really prepared to face the best teams in Asia? Is S-League ready to pump their players into the contest?

Japan, Korea, China, and Australia have stood strong in the competition because of their common forte - good passing and dribbling skills. When SAFFC was thrashed by Kashima Antlers 5 - 0 and Shenhua 4 -1, have we learned from the mistakes? S-League teams tend to play the EPL style - Long ball to a target forward. Yes, it works well playng with teams in Southeast Asia, but when SAFFC applied it to ACL matches, the Warriors were taken aback.

Reason is simple. Players in ACL are big and tall in physique, and are faster than SE-Asia teams. Hence long balls won't pose a threat to them. I feel that S-League needs to build up its passing and dribbling skills in order to better pinch those big teams in ACL.

The other factor is the fanbase. S-League has the lowest fanbase in Asia, approximately 2,000 in every game. More than half of the 2,000 are people who placed their bets on the teams, and who went for the sake of their winnings. So Singaporeans, stand up for your own team and motivate the players to win every match"

** Views expressed may not necessary be that of the blog owner, thanks**