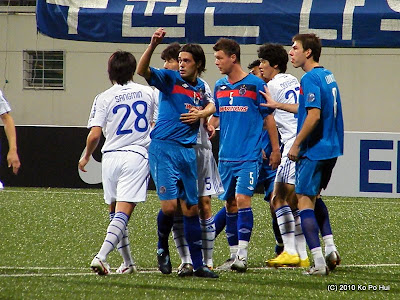 The SAFFC's foreign legion being sandwiched by the Suwon's defence in a dead-ball situation
SHORT SCRIBE
Unlike last year, when he wouldn't want to risk his key players because of "the weather and the field”, the Korean legend Cha Bum-kun must have decided that pride means everything as he brought along his strongest squad despite those "damaging factors" looming over his head.

After all, his Bluewings did not enjoy a good start to both their domestic and continental venture. 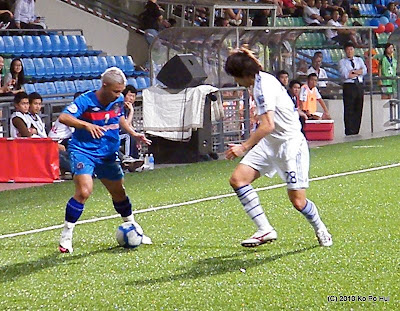 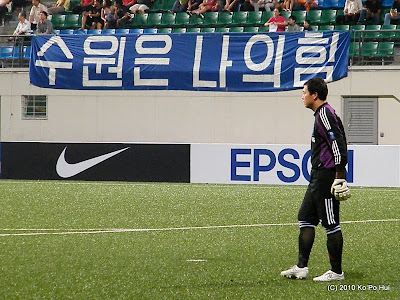 Evergreen custodian Lee Woon Jae was virtually untested throughout the game (any idea what was that written in Korean?).
But nonetheless, the Korean did what according to the script by defeated the resilient Warriors 2-0.

The sucker punch came at the stroke of half time when Brazilian import Juninho's free-kick broke the deadlock.

The Warriors did what they planned for the game when the match resumed play in the second half - close marking and tightening their back-line to restrict the Koreans from sneaking through. 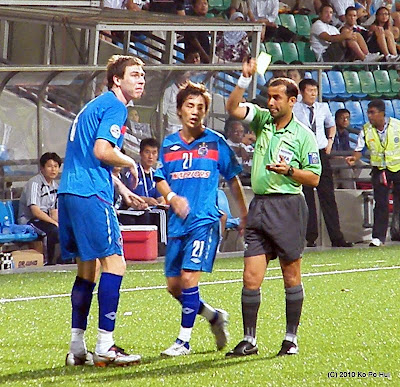 Lovric (left) was given the marching order in the 57th minute.
Although, it was unfortunate that the second yellow card earned by SAFFC's defender Ivan Lovric saw the hosts being reduced to 10 men. 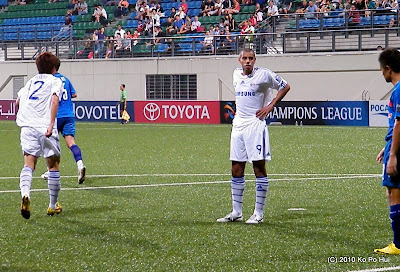 Jose Mota (9) could have scored his second goal in the 78th minute but he blew it
With that kind of unfavourable circumstance against them, Suwon eventually doubled their lead in 72nd minute through another import Jose Mota. 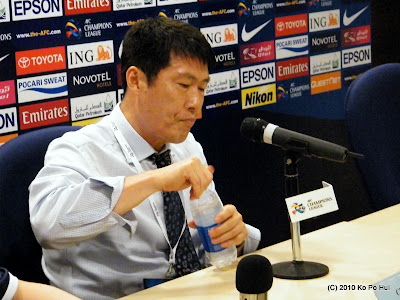 Bluewing's coach Cha Bum-kun (pictured above) paid tribute to his opponents by saying SAFFC is much improved, organized side as compared to last year with several players proved to be dangerous in various positions.

“SAFFC has a good defence and very quick in their counter-attacks, that's why I told my players to press them hard and cut off (the movement) of the ball.” coach Cha added.

As for his team's display, he mentioned the goals scored by both his foreign players is a sight of improvement for his side in their quest for better showing in their domestic league and the continental front. 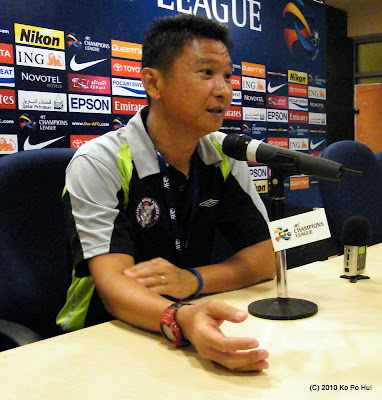 In his post-match assessment, SAFFC's coach Richard Bok (pictured above) reiterated the reality of playing at the highest level of the continental club tournament.

“We lost to a very good side and it's because the difference in the standard of football.” he said.

“But I'm happy with the team's performance tonight, especially the fact that we are without three of our key players.” which he referred to Shaiful Esah, John Wilkinson and Noh Rahman.


MORE PICTURES ON THIS MATCH CAN BE FOUND HERE.