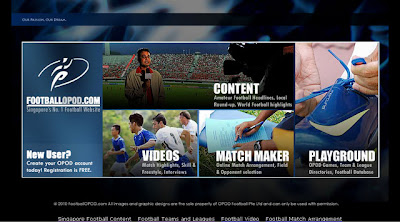 The entrance page of the portal (reproduced with the permission from the owners)
For thousands of social footballers out there, what are the major concerns when you want to arrange a simple kick-about?


And so, which is why thousands of weekend warriors out there learned to appreciate the assistance offered by local online football portal – FOOTBALLOPOD.COM, that has helped them to address those problems mentioned earlier.

This portal is an initiative started by a group of like-minded friends with the aim to help thousands of amateur football players and teams to overcome some of the teething issues that are not uncommon to them. 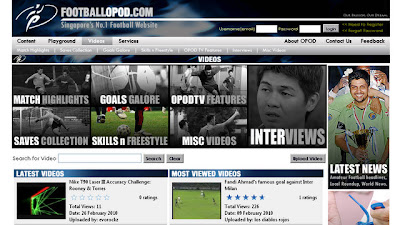 The portal is information-rich loaded with happenings around the amateur football scene
Integration through 2 channels
“FOOTBALLOPOD.COM aims to integrate the football scene in Singapore through 2 main channels.”said Mr Tan Li Yu, one of the founders of FOOTBALLOPOD.COM, as he explains the objectives of the website.

“The first channel is 'content', where we aim to deliver quality Singapore Football content through articles, images and videos.” added Tan.

The team behind FOOTBALLOPOD.COM compile their content through these three main channels:

The second channel which Tan touches on is the “features and functionality” his portal hopes to achieve.

Emulate the model of the renowned social media networking portal - "Facebook" is what FOOTBALLOPOD.COM hopes to achieve what Tan envisage.

Interaction, by virtue, means utilize the wide range of innovative services the portal has to offer, such as chats rooms, feedback channels, etc., in order to getting in touch with one and other within the amateur football community

One of such initiatives is the “match-making” service where teams can scan through the database of the user-friendly interface that is made available to registered users to look for opponents for a match.

On top of those mentioned services provided, another innovating feature offered by the portal, with the help of a dedicated server, is the site hosting service provided for registered users to create their online presence via a website. 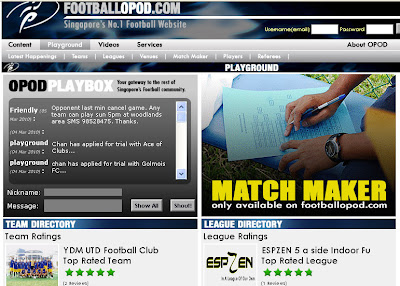 The innovative feature of "Match Maker" allows registered users to arrange match among themselves online.
Bridging up the gap...
However, having established a niche in the amateur social league scene doesn't make the young start-up resting on their laurels.

Highlighted the present situation where there's a lack of interaction between the amateur scene and the professional S.League, the portal hopes the vision they set out will overcome that absence of communication between the two major components of the local football.

“We also hope to bridge the current disjoint between the S-League and the rest of the amateur football scene in Singapore.

For more information on other services offered by the portal, please log on FOOTBALLOPOD.COM at http://www.footballopod.com
logged down by Ko Po Hui at 00:01:00