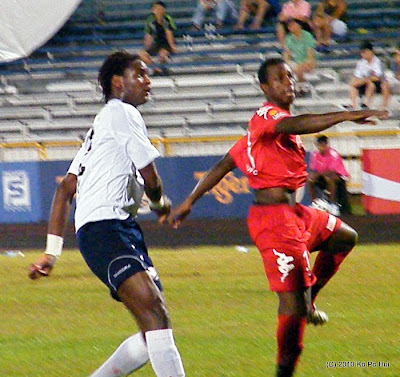 The moment after Mendy's (left) header that turned into the first goal of the night
SHORT SCRIBE
The much-anticipated "Test" match against the traditional powerhouses for on-form Etoile got under way at the Clementi Stadium.

The French got off to a dream start as early as in the first minute when the towering Frederic Mendy finished off from close-range. 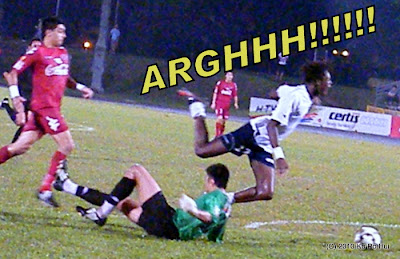 Etoile doubled their tally in the 37th minute when Protectors' keeper Lionel Lewis tripped an on-surging Mendy (pictured above) in the box to allow Matthias Verschave to score on the rebound after Lewis denied the spot-kick on the first attempt. 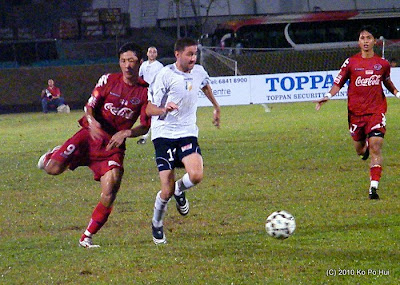 Karim Boudjema (middle) overpowered his markers before scoring the French's last goal at the stroke of half-time.
Relief for the home team they managed to cut the deficit in 43th minute with a Choi Chul Woo's effort, but it wasn't before the French restored their two-goal advantage in the 45th minute by Karim Boudjema. 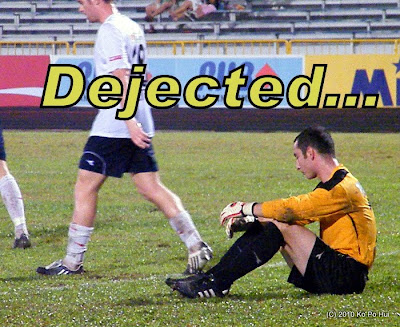 A dejected Etoile's custodian Brice Morandini sat on the ground after the hosts drew level in the 81st minute.
If it was to say Etoile dominated the first half, surely those at the ground would say the Protectors came back strongly in the second half to draw level through Sherif El-Masri in the 68th minute and Zulfadli Zainal Abidin's 81th equalizer. 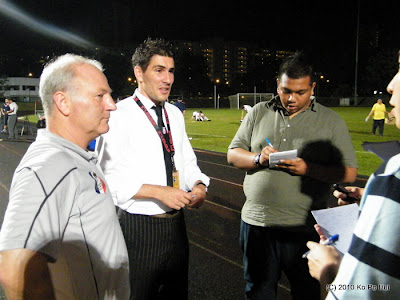 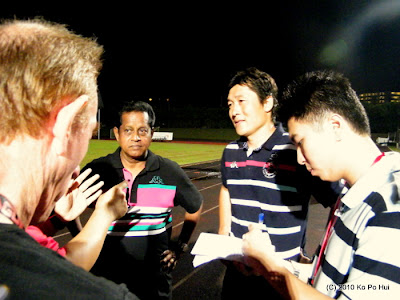 Home United coach Lee Lim Saeng (second from right, with team manager S Mahalingam on his right) share his thoughts on the game after the match.
A gusty fightback indeed for Home United, but deep inside their heart they should know very well that things wouldn't had been so tough should they not left off their guard so early.

Same goes to Etoile in the second half.


MORE PICTURES (raw and unedited version) ON THIS MATCH CAN BE FOUND ON "BoLASEPaKO" FACEBOOK PAGE - Click HERE to access and join as a member today to see these pictures
logged down by Ko Po Hui at 23:51:00