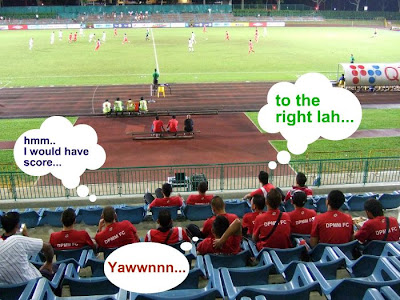 Imaginary caption above from me on these DPMM folks.

That sums up the situation at Yishun Stadium after the hosts, Super Reds, were cruelly denied all three points when young Aussie striker Bryan Soane scored with a header off a free kick in the dying seconds of the night to level the scores!

Put it this way, the Koreans threw everything at the visiting Balestier Khalsa right from the start and it wasn't because Tigers defended well but it just because the killer punch wasn't there.

At the meantime, another heart-breaking news from Shanghai saw SAFFC lost 4-1 to Shanghai Shenhua, during which the Warriors did drew level with the Shanghainese at one stage.

What a learning experience SAFFC's coach Richard Bok been talking about... Sigh...