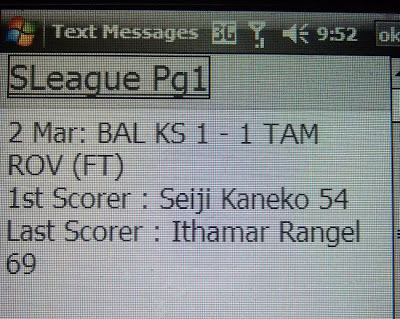 Got this SMS update just and the writings are clearly on the wall (or screen rather) that Balestier caused an upset by shared the spoils with one of those "early pace-setters" I mentioned, Tampines Rovers.

Seems like same ol' story for the Stags, which saw they took the lead through ex-Kashima Antlers player Seiji Kaneko in the 54th minute before the hosts levelled one-all by one of their imports, Ithamar Rangel.

No further comment on the play as I wasn't at the match, so no point for me to say anything more. Although, I would like add that it's rather disappointing for contenders like Tampines and Geylang to start their campaign on a low gear.

Here we are having these two eastern giants who stated clear they want to achieve something this year and what better time than NOW could not have they do something about it!

Like I mentioned earlier, don't leave everything till the last minute and if you can't pick up those points you felt you entitled to, then you'll only live in regret in the end.