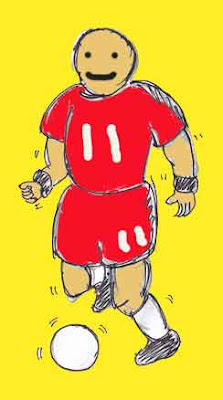 I ran out of ideas when I wrote this annual review.

A recap of some significant events in local football that occurred during these past months.

You may want to ask what am I gonna touch on this year's review?

Just wonder if one day we might want to have a complete overhaul of the existing youth development program we have?

Here I am proposing the American system where it's the schools that are grooming the players for the professional sports clubs, rather having the clubs "DIY" and eat into their wafer-thin resources.

At the end of the day, we should see a player who is groomed for the bigger stage and equipped himself with certain academic qualifications, in case his playing career ended prematurely.

Although this proposal may sounded radical and would run into conflict with this current system, it is to provide some other viable options.

Let us face the fact that we know that are some talented youngsters but because of the "paper chase", he choose to pursue his studies instead.

After all, it is the player himself to decide if he want to play full time, but aren't he glad that because of the "school grooming", he is assured of a diploma if he can't play professionally?

Ironically, the idea of such proposal was actually (if I recalled correctly) suggested by former Malaysian, Tampines and Paya Lebar Punggol coach Chow Kwai Lam (we all aware what happened to him eh?) years back.

Save them from the blushes

The ghost of their founder Hong In Woong's pre- season proclamation (above) will haunted the team as long as they remained in this doldrums.

The "Super" Reds (formerly known as Korean Super Reds) will always be remembered for the "etched impact" on their first season.

This club must have went through an overhaul in the management as well (other than the players) in mid- season.

Hong, the founding chairman-cum-coach, was being replaced by Charlie Yoon Y.G.

And in a move to distinguish the new regime from Hong's management, the word "Korean" was dropped with the club's mascot changed to a bear (rather a white stallion).

Though I have my reservation when they said they will be signing some players with K1 experience, "a fan club will be formed" and "reached out to the community" - sounds familiar eh?

But amid all the bad publicity, this team, together with Liaoning Guangyuan, did not suffer the same plight of Sporting Afrique or Paya Lebar Punggol (amalgamated with Sengkang Marine to form Sengkang Punggol last season) which busted after a season.

But whatever it is, don't fall into the "Sinchi curse" that's synonymous with most "pedatangs".

Every foreigner-based team been promised that they will not become the "Sinchi II" but somehow they eventually did (with the exception of Albirex, to lesser extend).

Some of the main reasons (based on my observation) that saw the demise of this unpopular pioneering foreigner-based team are:

So need more to say?

The fans or pure speculators? 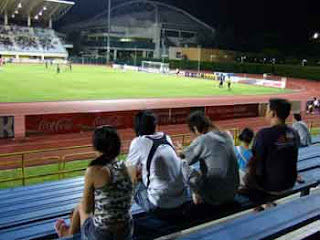 It's no doubt that the game is soul-less without its fans.

Yet more than a decade down the road, it seems that majority of the spectators at the grounds are neutral or bluntly speaking - the punters.

You know who they are...

Of course, we do have some passionate supporters in the form of those guys in some of fans' clubs.

But before they launched any missiles or darts towards this blogger, all I can say is,"You guys are great BUT you still have a long way to go before established your own identity."

The general concept is that these fans clubs are a reclusive lot (pardon me if that's not the fact, please feel free to rebuke.), if not, why the size of these cheer leaders remain stagnant or even shrink in size? (my observation.)

Lack of innovative cheering, dance routine and deafening drumming of some fan clubs make one wonder if these antics are to compliment or burden the team?

Take a cue from these guys...like these Boca Junior and Turkish fans, who effectively is the 12th player of the team!

Of course, not to the extend that will go out of control in those highly-passionated places!!

Months back, I wrote something about tapping onto the alternate media in spreading the words of the league. Simply because I already gave up hope on the mainstream media on doing so.

Am I not glad to come know that there's this passionate group of S.League diehard contribute this cause through Kallangroar.com?

If this "non-cooperative" stance keep maintained by the mainstreamer, I shall say, again, we shall ditch them aside and made our voice through other media means...Not point acting like a "beggar" begging for spaces .. 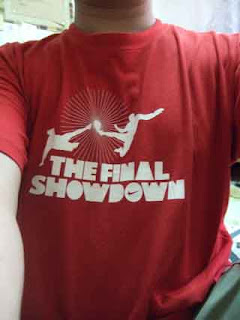 This T-shirt seems to be making a mockery out of itself..

This year will be remembered for the guessing game of when the National Stadium be playing its final game before being bulldozed.

On 30th June 2007, a grand event by SSC was staged to mark the "official closing ceremony" of the "Grand Ol' Lady", with an international friendly between Singapore and Australia (act of convenience, I guess :p)

But subsequently, much to disgust of some fans, World Cup qualifiers against Palestine (officially awarded to us, as the Palestinians did not turn up) and Tajikistan were held on the same venue.

Some fans are pissed by such acts that they felt "cheated".

Anyway, one thing for sure we aren't gonna be certain who is going to be the "last goal scorer" at the National Stadium (what a shame as this suppose-to-be coveted honour has been cheapen by such acrimonious turn of events). 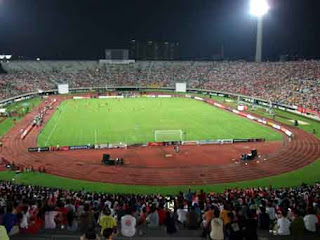 Since we were told third round qualifier will be staged at Kallang as well (are they serious?)!!

We know we still have a long way to attain the status of those of European or even the East Asian league, but let's be patient.

So what 10 years had passed? So long the faith is there, we shall make it with all of support of all stakeholders who must also play their part in being objective and fair.