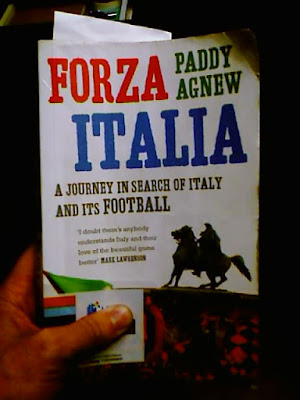 I'm not sure should I start a new label that entitled "Book Review", having read one book on Japanese football weeks ago, I happened to come across another excellent book - FORZA ITALIA at Bishan Library, not that long ago.
I picked up this book from the "dump box" where readers decided to "back out" their choice(s), I'm pretty sure they regretted for not reading this book by freelance journalist Paddy Agnew.

Written by Irishman Agnew, whom with his family been living in Italy for the past 20 odd years.
In this book, Agnew detailed the rise and fall of Diego Maradona while playing for Napoli, how AC Milan was served as a launchpad that kicked start the political career of its owner Silvio Berlusconi.
Other topics covered in this book included:

Since the season is over (I mean here in Singapore), I think it's a wise idea for me to read some books, especially football literature is something rare here ...

(P.s: I will keep posting some "Book Review"s in the near future.. stay tuned)

Email ThisBlogThis!Share to TwitterShare to FacebookShare to Pinterest
Classifed as: Book Review