Was surfing around the FAS website and saw something pretty interesting. 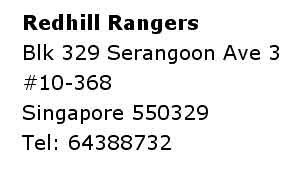 (Picture above: This is the mailing address of "Redhill Rangers". )
I would like to mention that this club was founded in the early 1980s at a coffeeshop (based on what I read) in Bukit Merah ("Red Hill" in Malay, of course) area.
They eventually rose to the top and played in the Primier League and one of their first foreign signings - the eccentric custodian Sandro Radun (the "white" Rene Higuita).
In the later years, they decided to join the S.League and shifted their base to Bukit Gombak and changed their name to "Gombak United".
I think there were some changes in the management that must saw the team split into two, with the Bulls (Gombak United) remains where it is now and the splitter group decided to carry on the name "Redhill Rangers" and play their matches in the lower rungs of the setup.

(P.s: whatever mentioned above is true to my knowledge, please kindly feedback if there's any mistake, thanks)

Unfortunately, not all the (football) clubs in Singapore have the luxury of having their own clubhouses (except Geylang United), unless they are someone like Singapore Recreation Club - the SRC, if not, like what I was told some NFL clubs actually operate from residential premises or "tumpang" (lodging) around any office that is available via gesture of goodwill.
Just take a look the addresses of clubs of "Redhill Rangers", "Bishan Arsenal" and "Toa Payoh", the given addresses look more like those in the residential than of that you would thought otherwise.
But one thing, I could not figure is what "Toa Payoh United" is based in Bukit Batok St21?
Another case of "mix-up in location"??
logged down by Ko Po Hui at 22:35:00

Email ThisBlogThis!Share to TwitterShare to FacebookShare to Pinterest
Classifed as: NFL