(This entry is formulated based on the transcript of the press release issued by the tournament organizer with copyright of images depicted here belong them as well.) 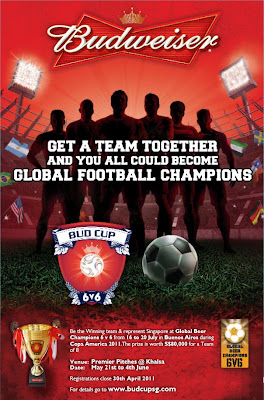 "To continue fostering international relations between the various nations, other than diplomatic visits and International summits, we have decided to put 2 of man’s biggest obsession together; Beer and Football, a combination which can never fail."

With that declaration in the statement issued to the media, the organizers of the "Bud Cup Singapore 2011" had sent out a clear message on the objective behind organizing such tournament - in fostering good relationship between nations with the game of football and ice-cold beer.

Come this May, Budweiser will be organizing the mentioned 6-a-side football tournament to determine the representing team from Singapore to take part in the "2011 Global Beer Champions 6vs6 Soccer tournament" also known as the "Budweiser Cup" in the capital of Argentina, Buenos Aires.

The registration to take part in this tournament is now open with participating to be segregated into two different categories - the "On Premise” and the “Off Premise”.
The main difference between the two categories is difference is that teams in the “On Premise” will have to pay a registration fee of $200 and show a proof of purchase of a case of Budweiser Beer whereas teams from the “Off Premise” do not have to pay, provided they have proof of purchase for a Budweiser 6-Pack.

According to the organizers, the registration is on a first come, first served basis therefore, it is important to register as soon as possible to be able to secure one of 32 places available in the tournament.

In the event that there are more than 32 teams registered, a draw will determine the final 32.

And all registration fees will be donated to the Kampong Glam CCC Poor & Needy. 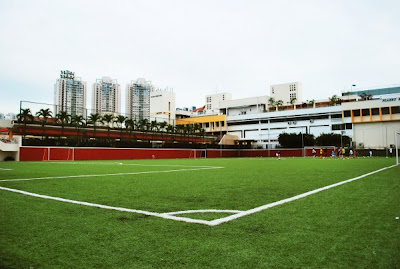 TO REGISTER TO TAKE PART OF FOR MORE INFORMATION OF THIS TOURNAMENT, PLEASE CLICK HERE TO ACCESS TO THE OFFICIAL SITE.
logged down by Ko Po Hui at 22:57:00