[Feature] No Young Lions, but Fearless and Game

(The content and images of this entry are obtained via former Balestier Khalsa's Head of youth development, Mr Mohamed Zainudeen with the objective of spreading the words about the development of disability football in Singapore) 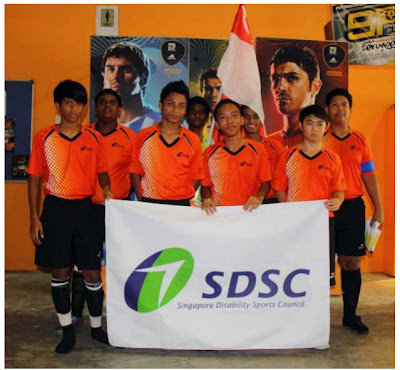 Twenty-five year old Khairul Anwar, born with cerebral palsy, has waited a lifetime to take part in a football league, representing his country. At the end of February, his heart’s desires were granted when he got to lace up his boots and tackle after Team Malaysia.

For the first time, a futsal tournament involving disabled youths from Singapore and Malaysia took place in Kuala Lumpur. 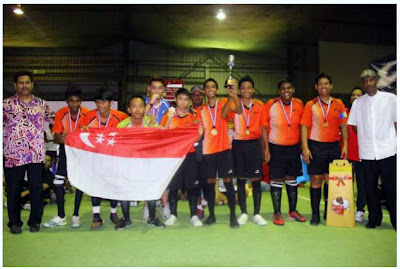 A team of 18 Singaporeans, made up of youths with both cerebral palsy and intellectual disability, led by Singapore Disability Sports Council (SDSC)’s Kids Inclusive Sports Club, made the overnight trip to hone their skills against their friendly competitors. A total of 10 players with cerebral palsy were sent by Asian Women’s Welfare Association (AWWA)’s Teach Me services.

For some of these players, although their conditions may impede their limb movements, on pitch, all traces of awkwardness dissipated as they performed dropkicks or made lightning-fast swoops towards goal posts. 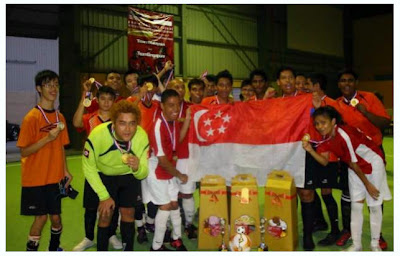 Raveendran Vijayalakshmiamma Joice, a physiotherapist with Singapore’s Asian Women’s Welfare Association (AWWA) also pointed out, “Sports such as futsal or badminton help our children with disabilities improve not just their coordination, but confidence as well.”

In a bid to spur participation among youths with multiple disabilities and to foster greater bilateral ties in the development of disability football, this game was hosted by Malaysia’s Individual Mentally Challenged (IMC) Training Centre for Children with Special Needs.

Mr Sunny Shalesh, the Malaysian coach, was excited that this futsal tournament came to fruition after months of planning. He now dreams of forming a National Football League for the disabled. “This way, we can mould players to represent specific international tournaments within the region.” 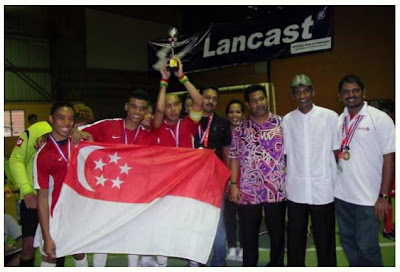 Team manager, Mdm Mumtaz Begum Binte Abdul Karim, of Singapore agreed, and added, “I hope that this will eventually grow into a regional event aimed at promoting bonding, participation and mutual co-operation amongst disabled children.”

The Most Valued Player (MVP) award went deservedly to Anwar, who has been playing in soccer clubs since he was nine years old.

When asked if he had any tips for the younger team mates, he said earnestly, “Play with your heart, with strength and honour.”
logged down by Ko Po Hui at 08:02:00