.. of you at the National Stadium just now, for the presumptive last game at the Grand Ol' Dame of Kallang. 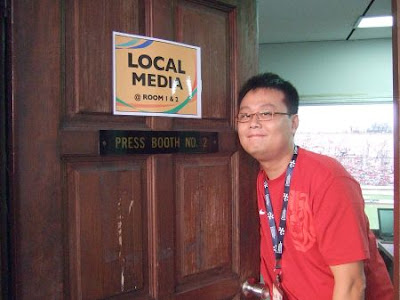 Many Thanks to Ms Lee TienSin for taking this shot at the doorstep of "Press Booth No.2"
(Wish I could have the black tag as a souvenir)

Unfortunately, the gallant Hassan Sunny in goal was not enough to stop the Saudis from confirming their spot in the final round of the World Cup qualifiers at our own expenses (those of you who saw the game should know why and how..)

With the exclusive last goal-scorer at the National Stadium fallen to Ahmed Al Fraidi.

SOME PICTURES FROM "SILVER" ROOM 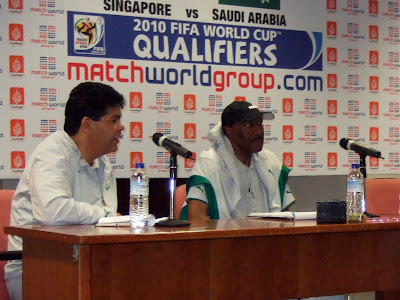 "We knew it will be a very hard game against Singapore, especially after they scored three goals against Uzbekistan (in their last home game)." said Saudi coach Nassir Johar (wearing a cap), through his translator on his right.

"And they made the Uzbeks suffered a lot before wining the game 1-0 at Tashkent.

"We were tactically well-prepared, having know that a good attack and having the control of the midfield had made the game easier for us." added Johar, who only recently took over the coaching of the Saudis' national team.

(P.S: you really have to take your hat off the translator who been so far the best I seen in this business, without relying anything like taking down notes or whatsoever, every words and statements just flow out instantly.) 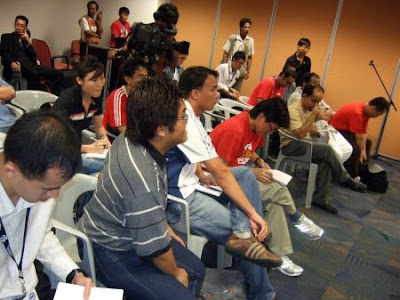 The media at work - fielding question for the coaches 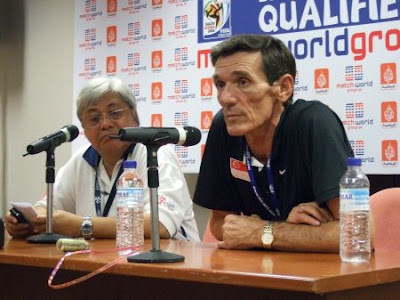 "It is a good opportunity (for the players) to be at this stage (of the qualifying round) as we played against some good quality opponents." said Coach Raddy, as he took over the centerstage of the press conference.

"Saudi fully deserved to win tonight and wish them the best of luck in the next round." as he paid tribute to the visiting side.

"Hassan (Sunny) done extremely well tonight and he shown the true character during the training, in my opinion, why not give hin a chance (to start the game)

"Qiu Li got the quality and have any chance like any other players" replied coach Raddy when asked for his assessment onthe two star performers of the home team.

FINAL NOTE: With the defeat to the Saudi, this could well marked the end of the era of the National Stadium, Thanks for the memory. :)