[Feature] Great Eastern commits a million to S.League for another two years

Reaffirm its commitment towards Singapore football since 2009, insurance giants Great Eastern (GE) has agreed to continue its sponsorship of the country sole sporting professional league - the S.League for another two-year.

Under the newly-inked agreement, GE will extend this partnership, which is valued at a total $1 million, till 2013.

"Football has always been one of the top sports in Singapore and our association with the league has helped to bring the Great Eastern brand closer to the community." said Dr Khoo Kah Siang, General Manager (Singapore), Great Eastern Life in the media statement released.

“One key initiative during this new sponsorship term will be an outreach programme to schools where we will be using football to promote life skills such as teamwork, perseverance, and character-building to the young," added Dr Khoo. 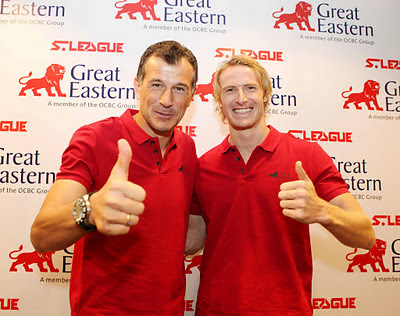 "And with this sponsorship renewal, they are reaffirming their conviction to continue promoting the beautiful game here in Singapore."

"With the many initiatives intended to reach out and target the community, I am sure this wonderful partnership between Great Eastern and the S.League will soar to greater heights.” added Mr Lim.

(Quotes were extracted from the media release and pictures credited to the FAS)
logged down by Ko Po Hui at 18:45:00