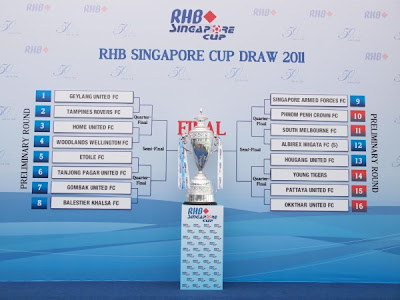 (Pictured above) The result of the draw
Defending champions Bangkok Glass confirmed the earlier quibbles of not coming back to defend the RHB Singapore Cup they won last year, while last season's runners-up Tampines Rovers will face Geylang United in a "eastern derby" showdown.

Burma's Okkthar Utd will be led by former Singapore national coach PN Sivaji, as he returns to Singapore to take on another first-time participant Pattaya United of Thailand.

Playing the tournament for the second consecutive time will be VPL side, South Melbourne (pictured above) from Australia with Albirex Niigata(S) standing their way in their quest to improve their showing.

With Courts Young Lions decided to opt out from the tournament, their counterparts from Malaysia - Harimau Muda will play in the tournament for the first time taking on Hougang United in their maiden Cup game (there goes the chance to gain revenge).

Already established itself as a tournament filled with strong regional flavour, this local premier Cup tournament had seen involvement in the past with teams like Brunei's DPMM FC, Thailand's Chonburi FC and Indonesian U23 led by former Aston Villa star Peter Withe. 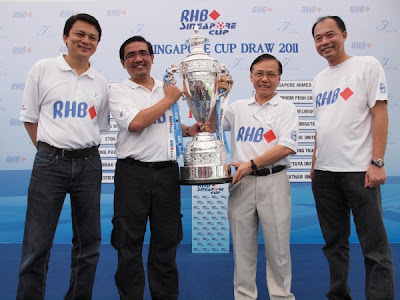 The draw ceremony of this year's tournament was held earlier this afternoon at "Sports Planet" East Coast Park and graced by the presence of FAS adviser Associated Professor Ho Peng Kee (pictured above second from right).

"RHB Bank has been a passionate and dedicated partner to the FAS all these years, never wavering in their support to nurture and grow Singapore football." said A/P Ho in his address to the audience at the ceremony.

"The new $1.5 million sponsorship (for 2011-2013) is a strong affirmation of the bank’s support of local football. I am heartened that they will continue to stay with us on this journey to help local football achieve greater heights in the region.” added the former FAS president.

The preliminary round will kick off on 6th June 2011 and the finals will be held on 5th November 2011.

(Copyright of the pictures used in this entry belong to FAS, unless stated otherwise)