With the 23rd Lion City Cup scheduled to kick off in less than a month away, it's not doubt that again that Hanafi Akbar (pictured below) and the rest of the National U-16 team will be carrying the hope of the country to repeat that kind of performance that captured the heart of the nation last August. 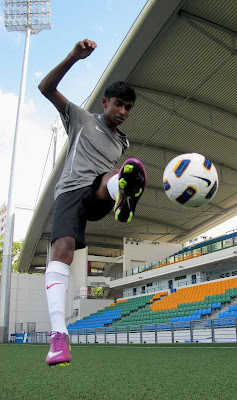 In a timely boast that came before the Little Cubs who are due to face the likes of their peers from the renowned clubs such as Juventus, Flamengo in June, the national team apparel sponsors Nike had named the 16 year-old, alongside with skipper Jeffrey Lightfoot and midfielder Ammirul Emmran, as one of their brand ambassadors in Singapore.

“I’ve never dreamt of getting this sponsorship. When I first found out about it, I was shocked, speechless and delighted. Nike first called my dad, and my dad was the one who broke the good news to me.” said Hanafi as he recalled the moment when he first came to know the news.

According to Nike, the striker will get to wear Nike’s Mercurial Superfly III (as wore by Hanafi in the picture below), the same boots worn by the world’s top players such as Cristiano Ronaldo.

“It’s an honour, I really like his style of play, as he is a very fast player.” said the secondary four student of the Portuguese superstar.

“It’s comfortable, lightweight and helps me to accelerate faster. I can run off the ball faster as the boots are light enough. Quick dribbling and speed are very important qualities of my game as a striker, so it helps to have the lightweight boots.” he added as he revealed the qualities of the boots that he will be wearing of that same of the Real Madrid's hitman. 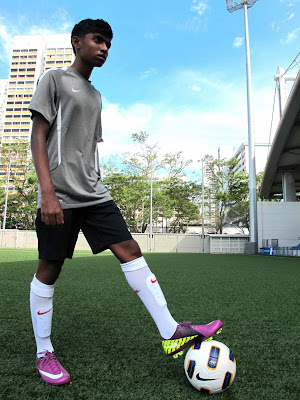 Since entering partnership with the Football Association of Singapore (FAS) in November 2006, Nike has committed in supporting and developing young local football talent through various initiatives such as last year’s campaign The Chance.

Said Nike on sponsoring the trio:“We have identified Jeffrey, Hanafi and Ammirul as three of Singapore’s brightest young football talents at the moment and would like to help them develop and improve their game.”

“Specific product needs of the players based on their positions and playing styles had been identified, and we will be providing them with the best products that we have to enhance their play on the field.” on the commitments shown by sporting goods giants to the triumvirate.

It was understood that the idea of signing them came about after the YOG and the progress of the boys had been closely monitored since before finalised the deal recently. 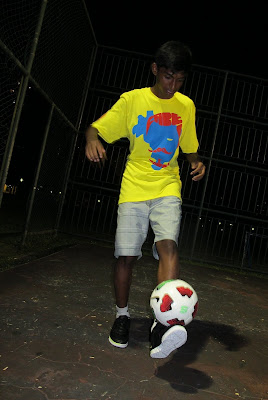 “I’ve been using Nike for four years and, and before this (endorsement deal) my family used to buy boots for me, and now they are happy that they can save a lot of money!”said the boy who first kick a football at the age of five and pointed to his father as his “biggest inspiration”.

“Since young, we have always spent a lot of time playing and watching football together. He was the first person in my life to tell me I have potential for football.

”And that gave me the confidence and belief in myself to pursue my dream. He bought me my first pair when I was six. We have always played football together since I was young.” revealed the Singapore Sports School student on how the game has been a crucial bonding factor between them.

Inevitably, beside the donning the national colours in weeks to come, Hanafi admits that it's also a big challenge at the same time to cope with the GCE “N” Levels examinations he is due to sit for in months to come.

Despite the punishing schedule to see him having to juggle his books and training, Hanafi felt it's sacrifice worth the effort even at the expenses of that of his social life.

“After YOG (last year), it was quite difficult as I had to spend a lot of time catching up on my studies. My teachers helped me greatly by giving me extra lessons for three hours every day after school.

“Sometimes you have to sacrifice your social life for training. When my friends ask me to join them for movies or go to the arcade, I can’t because of training, but it’s a sacrifice that is worth making for my dream.” 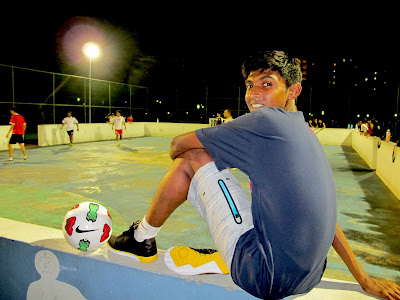 Which is probably the reason why the lanky striker is often spot playing street football (pictured above) with his primary school mates in his neighbourhood and catching with friends on Facebook whenever time permits to make up for the lost opportunities.

Those making up sessions will certainly look set to take place after the end of June with Hanafi and his team-mates are currently undergoing intensive training under new Japanese coach Takuma Koga in preparation for the Lion City Cup.

“Coach (Koga) focuses a lot on defence. He always says that to attack, you first have to defend and win the ball. All of us have really been working hard on our defence as a team. Coach has also taught me about the importance of polishing up our finishing touches.” said the avid Manchester United fan of his newly-appointed mentor.

Said Hanafi on the targets he and his team set for the upcoming tournament, which saw the likes of Fandi Ahmad, V Sundramoorthy being discovered since first started in 1977: “We’ll be up against teams like Everton and Flamengo, and we feel the stress to perform well as we are older than the rest of them.

“In terms of size, they are a lot bigger than us. But who knows, anything can happen. I hope to score more goals for the team, and also assist my teammates.”he concluded.

BEST OF LUCK TO HANAFI and THE TEAM!!

P.S: I'm trying to gather some feedback on how you guys find this feature done based on the interview transcript obtained via the PR agency of Nike, thanks