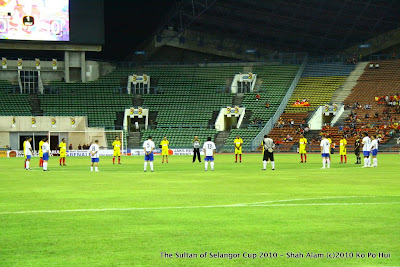 (Pictured above)The veterans shown their mark of respect to the late Mr Dollah Kassim
SHORT SCRIBE OF THE MATCHES
It's all square a piece at the Sultan of Selangor Cup 2010, as the Selangor veterans avenged for their last year's lost to their Singapore counterparts with a 1-0 win at the Shah Alam Stadium, thanks to a Sharin Majid's strike in the last third minute of the match, which was played 20 minutes each half. 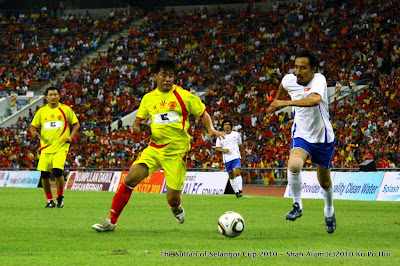 (Pictured above)Balestier Khalsa's coach Nasaruddin Jalil (right) in action against Selangor Veterans
While the marquee match saw the Singapore Selection destroyed the Selangor Selection 6-0 in front of the approximately 60,000 of their adoring Klang Valley supporters.

To be honest, the home side just returned to their home base after they lost to Kelantan a night before that saw them knocked out of the prestigious Malaysia Cup competition. 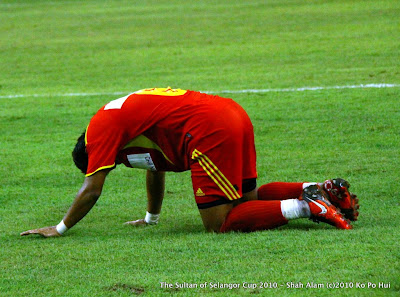 (Pictured above) Selangor in tatters
Aleksandar Duric jolted the confidence of the Klang Valley giant with a first minute strike, before Etoile's Freddy Mendy scored twice before the game was adjourned for half time.

Following the break, SAFFC 's Ivan Jerkovic, who replaced John Wilkinson in this tournament, scored immediately after the game restarted and with two more goals from Juma'at Jantan and Duric towards the end, the Singapore selection side retained the Sultan of Selangor Cup.

THE SIGNIFICANCE OF THIS UNIQUE RIVALRY
Last I mentioned last year, this unique rivalry between Singapore and Selangor is an indispensable part of the footballing history of both sides of the causeway.

While in some parts of the worlds, where hatred in the rivalries are firmly rooted but not for the case of these veterans from both sides, as depicted in the picture above that ex Lions' skipper Samad Allapitchay (in white-red top) embraced Dato' Soh Chin Aun, his Selangor counterpart from their heydays in the 1970s before the veterans' match.

As they would say, "On we fought hard on the field, but we are all good friends off the field".


Finally, got to witness myself the might of the Klang Valley fans.
MORE PICTURES ON THE MATCH DAY OF THE "SULTAN OF SELANGOR CUP 2010", PLEASE CLICK HERE.