[FEATURE] Fahmie got THE CHANCE!!!

There's only one winner who got THE CHANCE and he is none other than 22 year-old Ahmad Fahmie Bin Jamil, who emerged from the group of 400 players to be the chosen one to be Singapore's representative in this global talent search organized by Nike. 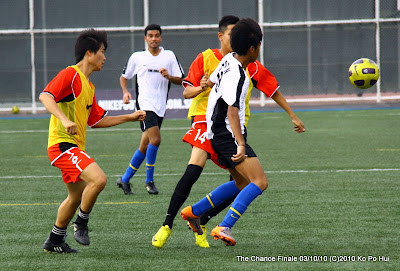 Since the launch of the program at the end of August, the coaching panel led by former Lions skippers Fandi Ahmad, Nazri Nasir and Aide Iskandar had been combing around the island to search for these talented weekend warriors who can only quench their thirst for the game at various hot-spots where these players were unearthed. 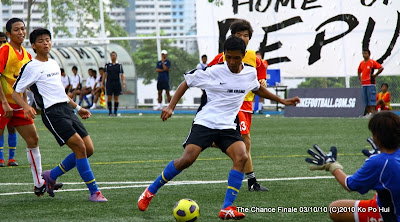 "Since the month of September, we had been to places like 'The Cage', 'SAFRA Tampines', 'FICO Sports Hub' to source for these players, as we felt that these are the so-called 'hot-spots' where we can find the raw talents we are looking for." said Mr Zainudeen Hassan who is the consultant to the coach panel (pictured below on the extreme right with the main coaching panel L-R: Aide Iskandar, Fandi Ahmad and Nazri Nasir). 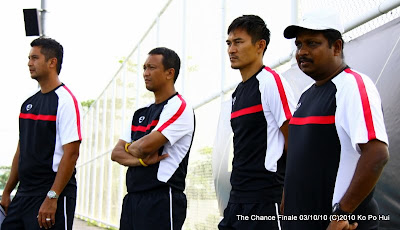 "Although only one player is the chosen one that doesn't mean those who could not make the cut should deprive a chance to further enhance his football career, which is why we invited representatives from various S.League clubs to take a look at these players as well." added the former Balestier Khalsa's head of youth development.

It's something agree by one of those clubs' representatives who were presented as Woodlands Wellington coach A Shasi Kumar commented, "It's a good talent scouting program.

"In fact, just 45 minutes of watching them in action I think there is one or two players, based on their age, are good enough to play in the Prime League and who knows they can even make it to the S.League." suggested the 34 year-old coach. 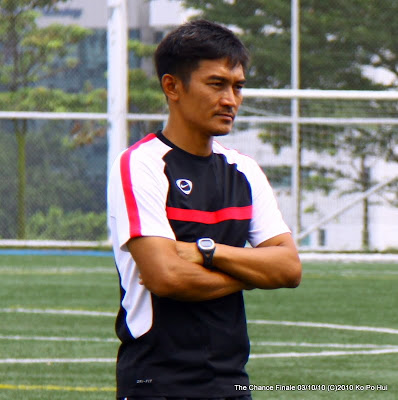 Also giving his stamp of approval is one of the main coaching panellists, Nazri (pictured above) who spoke to this blogger at the end of the event.

"This scouting program has been an eye-opener for me, as I always thought that we don't have enough football talents in Singapore.

"However, having seen more than 300 players turned up during the preliminary trials (that took place in September) and yesterday having 30 players filtered to the 18 of them today, I'm glad to see there are so many talented players for one reason or another who are not turning out for clubs or their schools."said the 1998 Tiger Cup winning skipper. 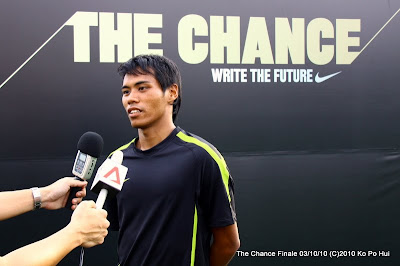 As for the man of the moment, Fahmie (pictured above as he was being interviewed by the media) is elated to be selected to represent Singapore in this world-wide search.

"Now what is important for me is to train hard by go jogging and doing some workout at gym every day, which I hope to improve my game and represent the national team one day, after all this is a very good opportunity and it's a chance once-in-a-lifetime." said the recently ORDed National Serviceman. 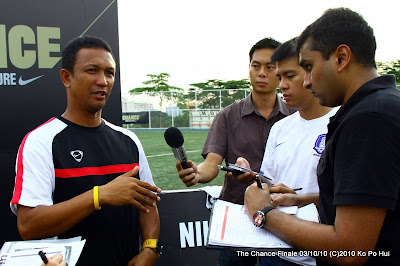 “Fahmie was chosen because he showed us his determination to become a professional player. His experience playing for a club in the Prime League gives him an advantage, as he demonstrated that he was mentally and physically prepared throughout the entire trial duration,” explained Fandi (pictured above left talking to the media) who is the head coach of the panel on the decision made.

Let us wish Fahmie all the best and hope he will be one of those selected for eight international places in the Nike Academy, where all expenses will be paid for during their one-year full time training in this prestigious training center.

(P.S: The finale was capped with a finalists match with "The Chance" trialists playing against Redhill Rangers and saw the former walked away with a 3-2 victory)