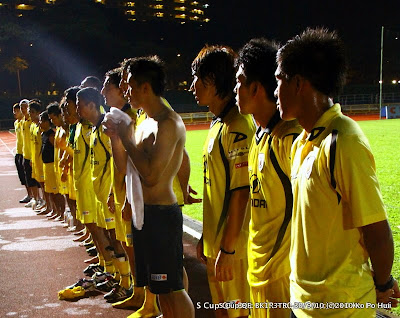 Tampines Rovers 6-1 Balestier Khalsa (aggregate score)
It was a farewell match for Lions striker Khairul Amri (pictured above on the extreme right in the Stags' customary post-match debriefing after defeating Balestier 3-1 at the Toa Payoh Stadium.)

Fortunate thing for the nippy forward was that while he scored his final goal for the Stags at the stroke of half time, he did not earn himself a booking like both Noh Alam Shah and Shahril Ishak did when scored their farewell goal - took off their jersey in celebration.

So he need not have to worry about the number of card he accumulated beforehand, should he make a return to local football in the near future.

Best of Luck in Balikpapan as a big welcome awaits him. 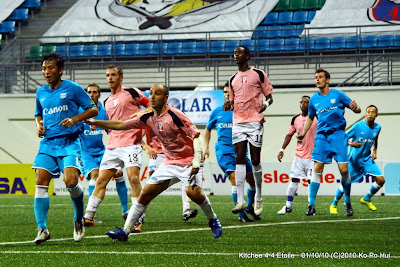 Etoile FC 6-4 Kitchee SC (aggregate score)
At least it was proven to us that are ways to outsmart league leaders Etoile FC - doing the Kitchee way.

True to what coach Josep Gombau said before the game that artificial surface of JBS suits his team's style of play and proven it did.

For those at the ground and home watching, I'm confidently to say they're the most deserving side to go through the next round.

Despite the early setback to allow the French to increase the lead on aggregate at the start of the game, Kitchee continued their flow passing game and successfully fought back to draw level on average.

However, poor defensive marking and decision by the match officials over the Etoile's hotly disputed third goal cost Kitchee the game and sent them back packing home to Hong Kong. 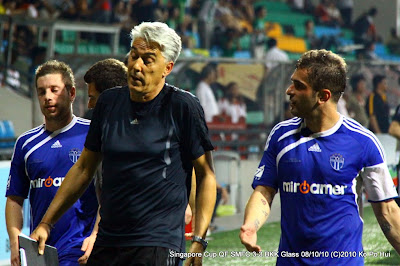 Bangkok Glass 6-4 South Melbourne (aggregate score)
To be honest, the Victorian side played well and were controlling the returning leg of their fixture against another invited team, Bangkok Glass.

With a two-goal deficit loomed over their heads, the Melburnians got down to business straight away by playing a pressing game that denied any chance for their opponents' much-feared duo of Gbenga Ajayi and Paul Bekombo to strike terror like they did in the first leg.

Unfortunately, lapse of concentration paid the price as the Glass Bunnies, buoyed by their large travelling fans contingent, took the lead in the 27th minute amid the Aussies' domination that eventually saw the Eddie Krncevic's (pictured above in dark t-shirt) men knocked out of the Cup.

The week-long three-match series featuring the two young sides saw V Sundramoorthy's (pictured above - file picture) boys triumphed on two occasions (one league and a cup tie) over their opponents, who still yet to register a victory at their home ground this season.