Guest Opinion - Refereeing Woes : What Rugby can teach its cousin a thing or two on how to resolve it...

(P.S: This entry will kick start a new column in this blog with readers are welcome to submit their article on various issues pertaining to local football scene as "guest columnist")

Mr Paul Kung, someone who has been very active in the rugby community as a player, coach and administrator shares his thoughts with us, from the rugby perspective, after he read some of the recent blog entries regarding the man-in-the-middle.

I have read that there is some debate in football about how much 'power' the Assistant referees have. I know that in the BPL and other professional leagues they are all miked up with communications equipment - "walkie talkies" so that all three referees can speak to each other and flag up any infractions.

The model most commonly used here is T5500 (above) and is fairly inexpensive - about $150 for a set if I remember correctly. They are powered by normal batteries as well. 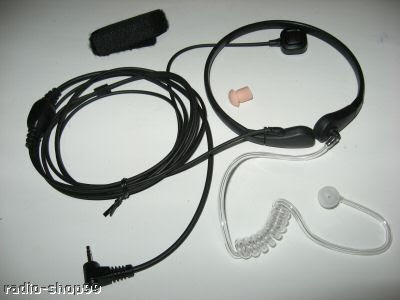 As far as I know, this radio and throat vibration set (above) is used in the army as well and works rather well.

In Rugby (Union) particularly, the Assistant referees have recently been given more power to help the man in the middle manage the game. They can tell the ref of infringements of any kind.

In Singapore - local rugby referees for the big games (finals and Premier league games) actually use a communication system. This is not expensive - regular "Motorola" walkie talkies with earpieces and mikes which gives all three referees communication with each other.

These are the same radios that I used in my school coaching, and is still in use now by a lot of school's sports teams to communicate between coaches. 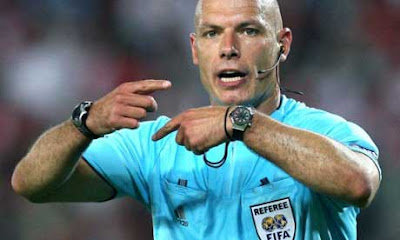 (Picture credit: Static.guim.co.uk) A referee with this comms equipment is a common feature in European Leagues.
I wonder if this could be done in Singapore - for then S.League - this is already being done for the BPL - why not the S.League? The technology is not that expensive , and as other sports have shown, while not as good as the expensive equipment, just as serviceable and good.

I personally think that this would help all three referees on the field look out for each other.

Another thing - and this might be more of a personal thing - but it always seems that the most arguments and on field displays of disagreement with the referee occurs most in football.
Look at all codes of rugby - Rugby League, Union and even AFL (Aussie Rules football) - there are fewer instances where players argue with the referee after a call is made. Most professional players will walk away and keep quiet. Even at basketball, you do get the occasional confrontation, but nothing major. 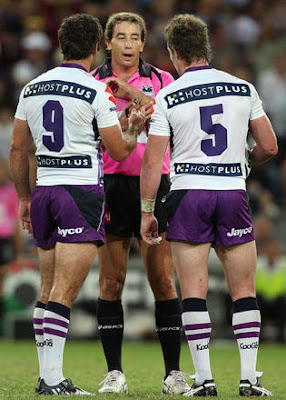 (Picture credit: ABC- The Sports Desk) In Rugby, there are fewer instances where players argue with the ref after a call is made, why?
Is on field behaviour towards refs the issue? Does football players let passion get the best of them?

One would think that being professional S.League players will bring some form of professionalism. That being said, all one has to do is look at how the game is paid at the top level in England and Europe and you will know that that is not the case - a sport specific culture thing?

Many thanks to Mr Kung for his opinions on this much-debated issue, let's sincerely hope his views would eventually pick up the league authority soon.
logged down by Ko Po Hui at 07:00:00