Video Referee - not always the BEST but viable, however.... 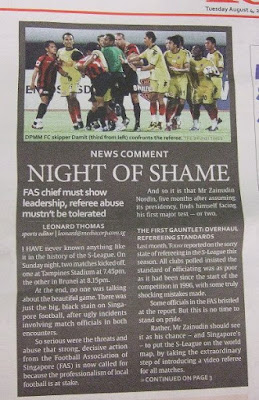 (Picture) Sad for the fact that negative story as such will hit the front pages and common folks would then take notice of the local game for the wrong reasons.
Days after the black Sunday, Leonard Thomas, the sports editor of TODAY urged the FAS to make a bold initiative by implementing the use of video-referee at the matches to address this nagging issue (above).

However, one must bear in mind that using such technology may not necessarily solve the issue overnight.

Furthermore, several factors need to be taken care of should the league authority decided to push ahead.

Logistical
Soon expensive equipment have to be installed and more manpower will have to be deployed on match days if the league authority decided to give the go-ahead.

Are we ready for this in the unfavourable financial climate when prudence is the key?

Time
The game has to be halted should the referee decided to consult the video referee.

Time must be added on to compensate the loss of time incurred due to the pending of a decision and flow of the game will be disrupted. 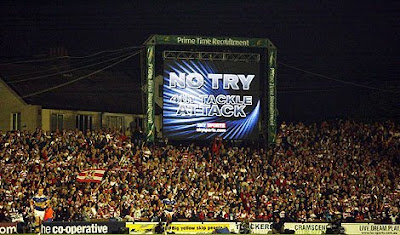 (Picture credit: Guardian) will Singaporeans willing to wait for a pending decision like in Rugby?
Thus, the game would have to end at the later time and local fans have every right to grumble over that if the game end at 11pm on a weekday (you can't rule that out).

Other than that, some media outlets may have to think thrice before cover some of the matches, if the match ended past the scheduled slot as they would much lesser time to file their stories.

Dilution of credibility of referee?
If the particular referee is someone who is indecisive and consistently let the technology made the decisions on his behalf, therefore, his credibility will be called into question.

So would it lead to situation that some referee would push some of the crucial decision making to the video-referee?

Not always fault-proof
Beside the malfunctioning of the equipment we may have to deal with during the game, the use of video cameras as judge may have its own restrictions. 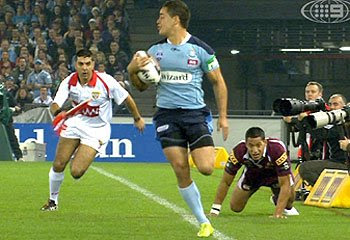 (Picture credit: Foxsports) For this instance, the video-judge failed to deliver a convincing judgment on this Jarryd Hayne's disallowed try and caused NSW to lost to their arch-rivals Queensland in this year's Rugby League marquee event - State of Origin match (I saw it on TV!)
If an alleged foul is being committed at a spot where the camera not able to capture, how long would the discussion over this offence lasts without causing unnecessary time wasting?

At the end of the debate, it must agree that use of such technology should be seen as a compliment not taking over as the role of arbitrator of the game.

Nonetheless, before we start talking about install those pricey equipment, shouldn't we look into the root problem that we are all facing now - the quality of refereeing in Singapore football that had been the ignition point that led to those unpleasant incidents on Sunday.
logged down by Ko Po Hui at 18:00:00

Email ThisBlogThis!Share to TwitterShare to FacebookShare to Pinterest
Classifed as: media, referee, S.League