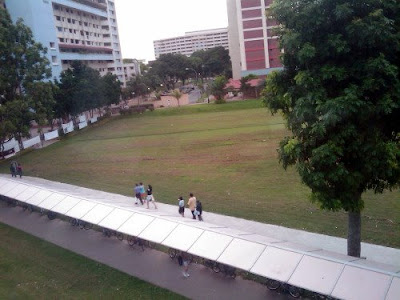 (Picture) Took this picture yesterday during my train ride when the north-bound train stopped at Yishun station.
Of course, it's nothing usual about this green plot of uneven field and furthermore there's this sheltered walkout that linked the station to the nearest residential block, but what prompted me to blog something about it is because the field used to be the training ground of already-defunct Gibraltar Crescent SC, which used to play in old Premier League during the 1980s.

I still recalled many years back while on my way to my uncle's place in Yishun, I would have alighted at this MRT station and transferred to a feeder bus and it was during one of those visits I chanced upon an opportunity to catch the team in training.

Sadly though, the team, together with another northern-based team, Sembawang SC merged together as Sembawang Rangers FC to play in the inaugural S.League season in 1996, had faded away in 2003 when the Stallions decided to quit the league due to financial difficulties.

What a shame as the team that used to have the likes of Nazri Nasir, Thai midfield star Tawan Sripan and Noh Alam Shah, was one of the best-supported team in the league.