At least we got one side of the story now (Part One..) 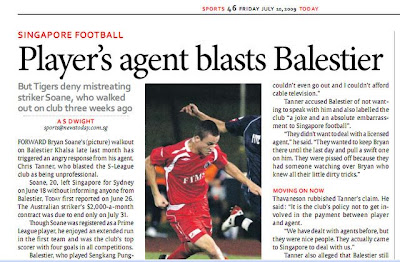 (Picture) Soane and agent gave their side of story
Finally, we got the other side of the story after the news broke out weeks ago that the young Aussie striker had quit and went back to Sydney.

In the latest twist in the event that it was alleged by Soane's agent that "The club tore strips off him for doing nothing,".

Now that we had heard both sides' story, let's leave it to the league authority to look into it as too many opinions and views will lead us to no where.

Email ThisBlogThis!Share to TwitterShare to FacebookShare to Pinterest
Classifed as: Balestier, S.League