Come Clear and Balance it!!

Two news broke out today which had been circulated around the fraternity lately. 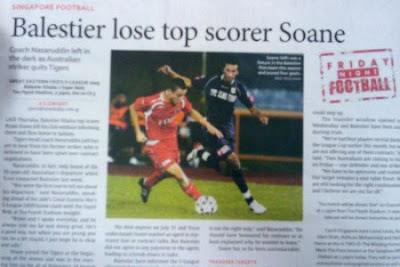 (Picture from "Today") "Where are you, Bryan?"
Young Australian striker Bryan Soane had left Balestier Khalsa over contractural dispute, while management reshuffling took place in Sengkang Punggol saw coach Jorg Steinnebrunner and chairman Ben Lim walked out of the club.

Based on both stories by TODAY, the details seems to be one-sided as public were only given one half of the stories, while scratching their scalp why the other half, being the concerned parties, were not being quoted or giving their side of the stories. 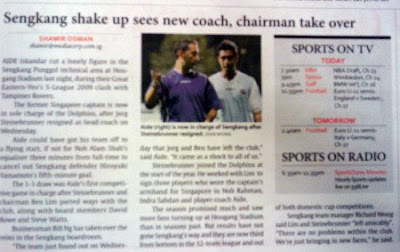 I was told efforts were made to get into contact with the gentlemen but with not much success.

Apparently, the gentlemen felt it's not time to spill the beans or they just simply don't want to dwell on it?

Whatever it may be, I felt the fans have every right to know the inside out of both stories rather than having their imagination running wild by going on speculating aimlessly.

(Picture from "Today") - Saswa spilled the beans last year...
Ironically, they should have did what former Sengkang coach Saswadimata Dasuki did last year when the ex-national defender came out in public to refute claims that he "went on leave to sort out some personal matters" when in actual fact he was told to "do so by the club".

So what if it may be the case that can of worms would be opened if these gentlemen decide to let go everything off their chest but one thing for sure is that some questions shall never be swept under the carpet.
logged down by Ko Po Hui at 23:16:00

Email ThisBlogThis!Share to TwitterShare to FacebookShare to Pinterest
Classifed as: Balestier, Sengkang Punggol