Cup games are always something different as it's a no-hold barred contest between the two team that whoever lose - OUT YOU GO!! simple as that.

The match between Geylang United and Brunei DPMM was my first League Cup match having just returned from my Down Under trip. 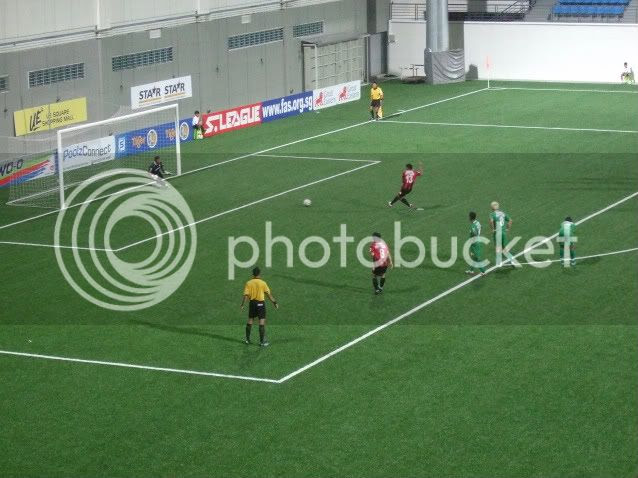 This was deemed "NO-GOAL"
Was late for the game as it was last minute decision to be at the ground for this match, so I missed the first goal of the night.

But sheer aggressiveness shown by both teams gave the fans barrowload of goals to cheer about and end-to-end action of this game had also ensured this season's League Cup not being a dull affairs (as I was told). 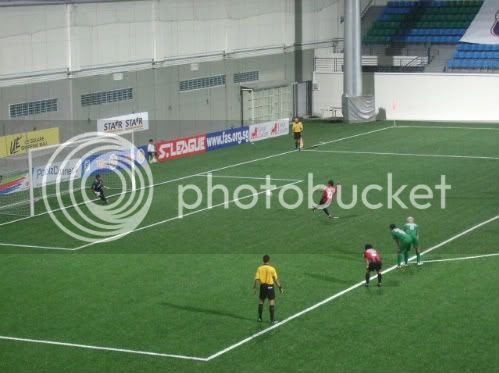 The was the "freeze" moment before the ball went in
"There are some individual errors that we have to look at it, specific players have to ask themselves why as we cannot carry on like that to the next league (game) and the Singapore Cup but I'm proud the way they played." said Geylang's coach Mike Wong after the game.

Coach Wong revealed that the Eagles will approach their next league encounter against the same opponent differently as "this is a Cup game so when you are two-one down, you still go for a two-two draw but because this is going to be a league game so we approach differently."

DPMM's fans hailed their heroes after the hard fought battle
While his DPMM counterpart Vjeran Simunic would rather to stay focus in their on-going League Cup semi-final clash against Woodlands Wellington next week.

"Woodlands are a very dangerous side as we played Woodlands three times and we lost twice" said the Croatian coach paying tribute to his semi-final opponents.

"I think the game (against Woodlands) would be very tough like tonight." he added.

When asked if his team are at the top of their game now, this is what coach Simunic said,"Yeah, I'm sure because against SAFFC, we dominated the last 20 minutes and also today we played very nice last 20 minutes, so both were good results for my team."
logged down by Ko Po Hui at 00:29:00