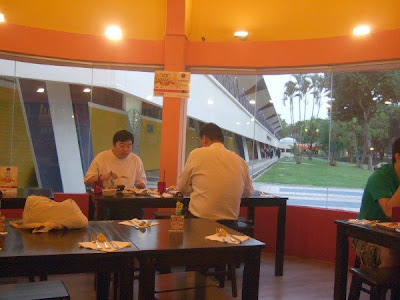 (Picture) snapped this at "Sakura" YCK stadium
I was at Yio Chu Kang the other day for a meal.

The dinning place was one of the two restaurants located at both ends of the Yio Chu Kang Stadium.

As far as I know beside YCK complex, various sporting complexes (e.g.: Jurong West, Tampines, Choa Chu Kang, etc.) around the island also have such dinning facilities incorporated into these premises.

Now, here comes the question - Does any of the S.League clubs thought of working out with these eateries to venture into corporate hospitality on the match days?

Just a tweak to the idea I mentioned before by having clubs venture into this business model that has been an important income earner in Europe.

As the matter of fact that clubs here do not own the stadium they based, thus it's impossible to have any dinning facility inside the stadium compound unless the SSC (the landlord) give the go-ahead.

With some of the grounds having this "ready-made" requirement so why not have a thought of it?

Basically the idea work like this: the club will host these corporate guests in one of these dinning places before the kick-off (i.e: Dinner Time).

After all the atmosphere inside such eatery would be more conducive as compared to the stadium itself.

Some kind of arrangements can be sorted out if these eateries can provide some perks to fans who attend the games (remember discount being offered by one seafood restaurant during the Malaysia Cup days by presenting the ticket stub).

Email ThisBlogThis!Share to TwitterShare to FacebookShare to Pinterest
Classifed as: food, marketing