Although weather wise in 'keeper Hitoshi Sogahata's words (in sleague.com) "It is humid but we are pretty acclimatized after training this morning. We are confident of performing once we are used to the weather".

BEFORE THE START OF THE MATCH 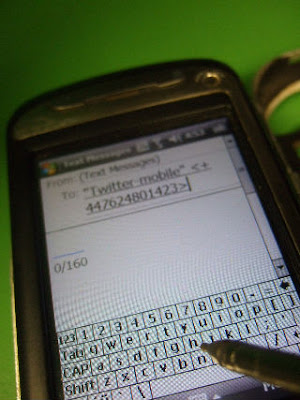 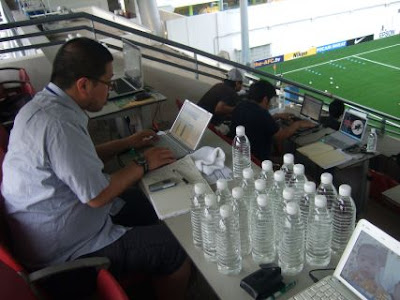 A group of Japanese media already at work when I reached the ground. 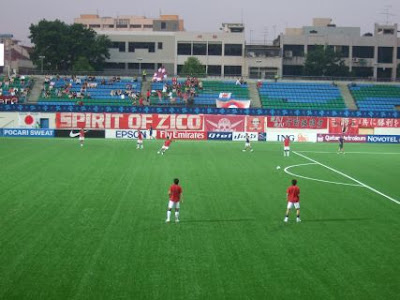 The giant banners unfurled by the visiting Japanese. 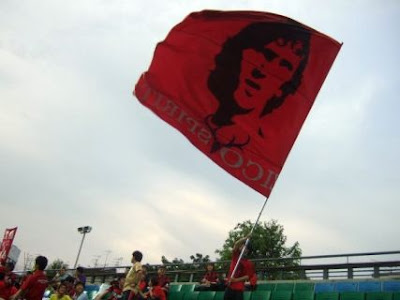 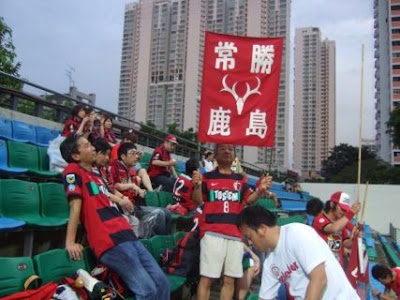 These fans flew in from Japan for three days to catch their heroes in action.

FIRST HALF SHORT TAKE
Not doubt it was a case of mis-match as the gulf between the two teams shown right from the start of the game. 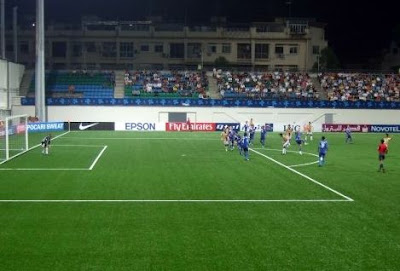 The visiting Kashima Antlers true to what they promised, and shown no mercy to their Singaporean counterparts with their sheer aggression (but that's what SAFFC needed if they want to learn anything called "experience" from ACL).

Such precise and swift movements shown by the Japanese champions was liken to that of a surgeon having an operation. 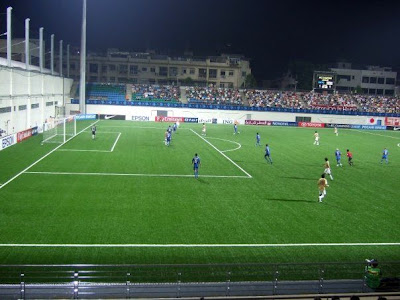 Kashima opened the account of the night when Masashi Motoyama scored from close-range, after Hafiz Osman failed to prevent Atsuto Uchida from center to the box that reached Motoyama in the 222nd minute.

But Hafiz redeemed himself two minutes later with the equalizer from inside the six-yard box, having nicely latched onto a Therdsak Chaiman's cross from left. A porous SAFFC's defence allowed the visitors to snatch the lead back in the 42nd minute through Uchida before sending the teams back to the dressing rooms for half time interval. 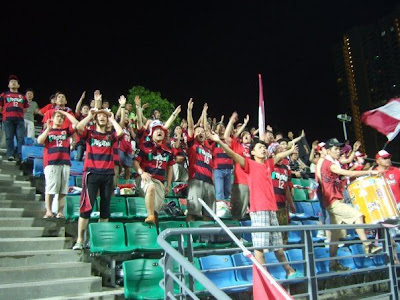 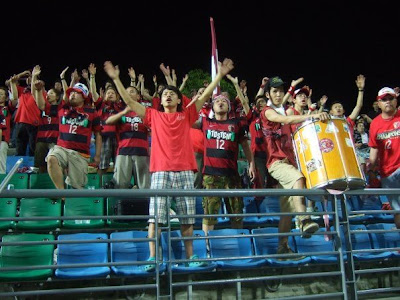 SECOND HALF SHORT TAKE
Barely could SAFFC settled into the second half, Kashima showed their might again as early as in the 47th minute when Yuya Osako's header increased the deficit between the two, following some nice touches and pass from Brazilian import Marquinhos. 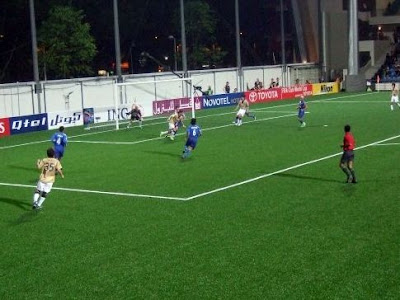 Things were not going SAFFC's way as skipper Aleksandar Duric saw his spot-kick saved at the near post by 'keeper Hitoshi Sogahata in the 57th minute after Park Tae Won was brought down in the penalty area by a Japanese defender. 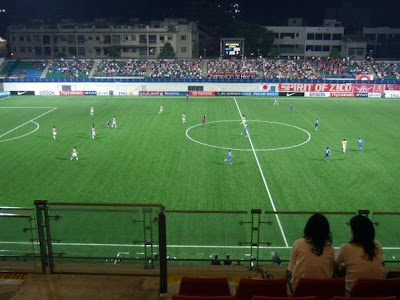 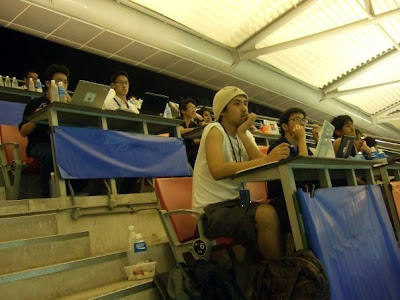 I guess the Warriors were given a lesson that was really well-taught for playing at this level with Daniel Bennett's own goal in the 93rd minute closed the day at 4-1 to the visiting side.
PRESS CONFERENCE 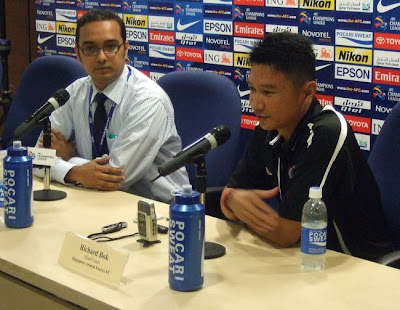 "I thought we played quite well at some stages (of the game) and gave a good account for ourselves, just unlucky that we lost to a higher-level team (like Kashima)" said SAFFC's coach Richard Bok (above, right) in his assessment of his charges' performance.

"Duric is still my captain and still gives his best and yes, despite having a lean spell at this moment" added coach Bok when quizzed by the media about skipper Aleksandar Duric's less-than-impressive outing.

"For the last three games, we always raised our game and I hope those performance shown in ACL will bring to the S.League as well" concluded the Warriors coach. 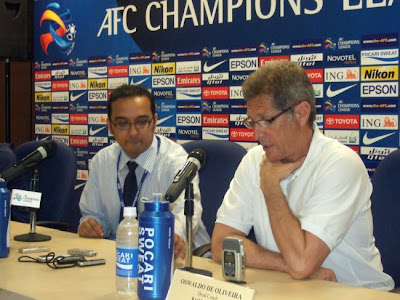 A stern-looking Oswaldo de Oliveira greeted the media and blasted the match officials for the number of yellow cards awarded to his team.

"We come here to win, get the three points and our goal is to qualify for the next round (of the ACL)" said the former Santos, Flamengo, Sao Paulo (and the list goes on...that's impressive eh) coach.

"SAFFC gave up in the second half their defensive play and we could have scored some more goals" when asked about his impression of his opponents. 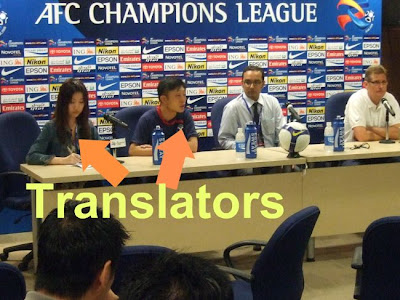 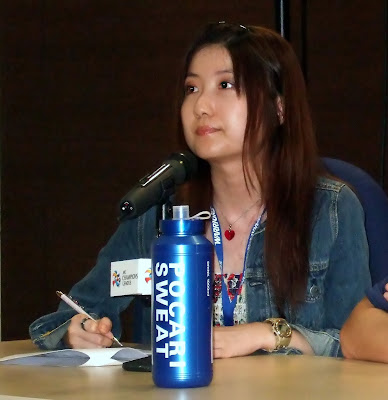 There were two translators at the press-conference, who were there to provide both Japanese and Portuguese translation to English whenever was necessary (with this impressive lady translator who speak with a crisp American-accented English).

AFTERTHOUGHTS
The visiting Japanese fans definitely gave a footballing lesson to their hosts counterparts, just like their heroes on the field did.

Despite small in numbers, the group of fans, comprised of both gender, young and old, had shown what's football cheering is all about unlike those "template" we saw at most of the grounds.

(P.S: the "twitter" had moved to the sidebar on the right, and on-and-off will make its presence on the main area when necessary)
logged down by Ko Po Hui at 23:39:00