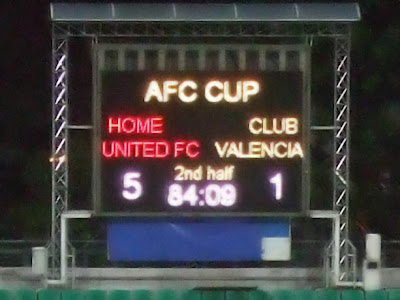 The Final Score
TWITTER UPDATE
The "Twitter" box had been removed from this blog entry and you can trace whatever I "tweeted" on the right of the page (under the "BoLASEPaKO" on twitter menu). 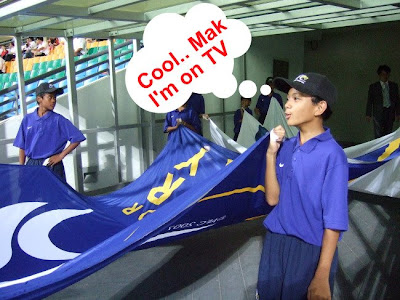 Banner boys getting ready
It was indeed a tame affair as compared to ACL, as the crowds were much lesser than expected.

Maybe like what a friend mentioned,"most of them might be at Selegie now" (Selegie being the place where Singapore Pools HQ is located and they offered to broadcast this game to those punters who were there.) 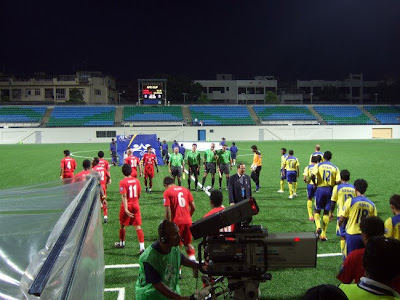 Teams lining up before the start of the game.
Two quick goals under less than 10 minutes by Home United had stamped their authority in the game as the Maldivian struggled to cope with the onslaught by the Protectors right from the start.

An unmarked Firdaus Idros volley home after Fadzuhasny Juraimi's shot was cannoned off the frame in the third minute, before Peres de Oliveira headed home the second goal after he connected well to a Juma'at Jantan cross from the left in the seventh minute. 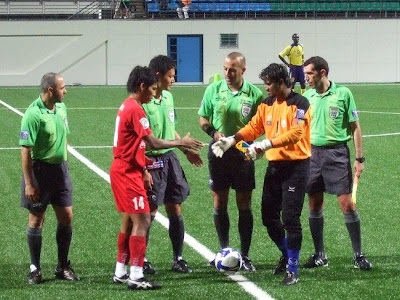 Pre-match pleasantries
Peres turned provider twice following that by set up a nicely laid ball to a surging Kengne Ludovick who blasted from outside the box to make 3-0 in the 24th minute and low crossed the ball to an unmarked Juma'at Jantan in six-yard box to slot home in the 36th minute. 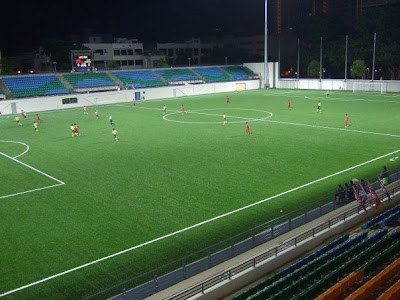 Shot of the action from upper tier
Valencia scored their consolation in the 64th minute when Nkemi Arim tap-in from a Rilwan Riley's cross from the left, the visitors seemed able to crawl themselves back to the game by staging such decent offensive plays following that , though it was rather too late as the reality was that they were already three goals down with their oppenents shifted their game to a lower gear then.

Ludovick's free header from an open play resulted from an Itimi Dickson's corner made it 5-1 in 78th minute after some failed attempts before that.

And with this victory, Home United see themselves edged closer to the next round... 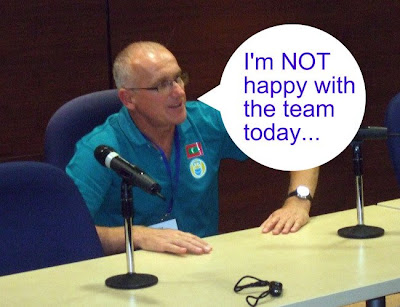 Club Valencia's Coach Jozsef Dzurjak, just as he about to leave the room.
"For the first five minutes, my team went to sleep and I'm not happy with their performance." said Club Valencia coach Jozsef Dzurjak in his very (less than FIVE minutes) brief assessment of his team's poor showing. 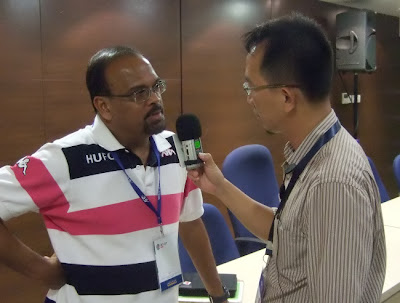 "We scored early in the third and seventh minute which gave the boys the confidence in this game" said Mr P N Sivaji (pictured left on above with Radio 938 reporter Philip Goh) in his post-match assessment.

"During our half-time talk, I told the boys to put aside the 4-0 first half lead.

"Valencia started strongly in the second half as they begun to throw their players forward, forced us to make some mistakes which we need to address these problems before our next league game against the Super Reds." added the former national coach.
logged down by Ko Po Hui at 00:41:00