[Event] Live televised match back to heartlands at Bedok Stadium on May Day...

Live televised football is making its return to heartlands on the Labour Day (1st May 2009), when Geylang United will play hosts to defending Singapore Cup holders SAFFC at the Bedok Stadium.

The Eagles are enjoying some good run of form lately since Mike Wong took over as the head coach of the Bedok-based team, whereas the SAFFC Warriors aren't having that kind of luxury after that away defeat to DPMM that knocked them off from the top of the table days ago at Brunei. 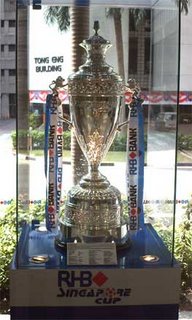 Singapore Cup trophy
Still cup game is a different kind of ball game as it's a "knock-out" competition with whoever lose this fixture will have wait for another season to challenge for the coveted trophy (above).

So being a "long weekend" this coming weekend, it's a good option to head down to Bedok Stadium for a night to be filled with thrill and explosive actions rather than be at the pubs, discos or being couch potatoes!!