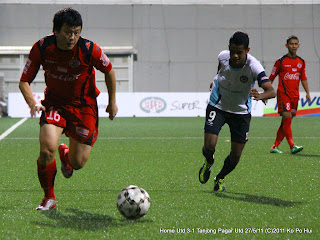 SINGAPORE, 07 JUNE 2011: The new-look Singapore team cruised to a 4-0 victory over the visiting Maldives team in the international friendly held on June 7 2011 at Jalan Besar Stadium. The match started off with a new captain for our national team and it was none other than 20-year-old Hariss Harun, who was also playing in his new role as a centre back.

A penalty in the 13th minute allowed the Lions to draw first blood and it was brilliantly converted by Qiu Li (pictured above on extreme left). He got himself on the score sheet again six minutes later before Shi Jiayi thrilled the 2,166 strong crowd in the 30th minute with the third goal of the match. Aleksander Duric proved everyone why he is the S.League’s top scorer with the final goal of the match in the 49th minute.

The Maldives team tried their best but were unable to break through the Singapore defensive wall and the match was played out before the home team were cheered off the pitch by their new-found fans.

Singapore captain Hariss Harun was delighted with not only the result but also the new batch of Lions fans who left Jalan Besar roaring to the beat of their cheers.

The 20-year-old said during the post-match press conference, "I feel that we did well to get a good 4-0 victory over Maldives and we can only continue to do well as a team. The fans were fantastic and although the stadium was not a full-house, it is up to us the team to win the fans back. But these fans, their cheering and new chants were great."

Maldives' coach, Diego Cruciani was equally full of praise for the new-look Lions at the post-match press conference when he said: "This Singapore team we played today is very good. They are compact and organised. I also saw a very good player in No.25 (Qiu Li). He has a great shot, can be the playmaker and can also control the game. It is hard to find a player like this."