[AFC Cup] Bent for Revenge for the "Twin Qilins"...

When the reigning TPL champions Muangthong United make their return to the Jalan Besar Stadium tomorrow to take on Tampines Rovers, I expect it would be a fiery AFC Cup showdown.

After all, when the "Twin Qilins" were here last February, they were crushed out of a chance to make it to the continent's biggest club tournament - Asian Champions League (ACL) proper, following their loss to the Singapore's SAFFC on penalties. 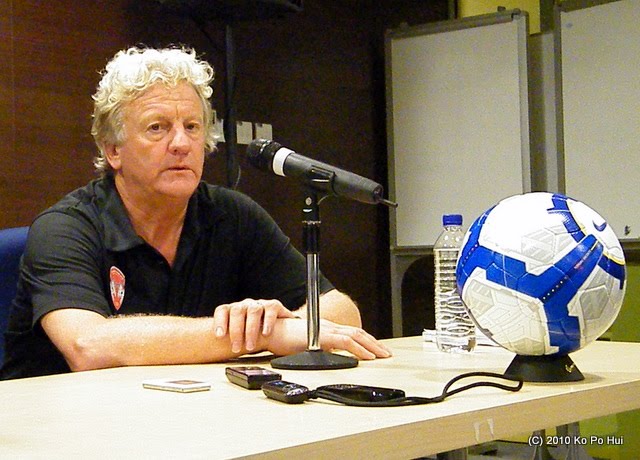 The agony left a bitter taste on the taste bud of the then coach of the Thai side, René Desaeyere (pictured above).

It's a pity that such a game had to depend on 'lottery' (penalty shootout), but it's not lottery because there's a referee (in charge of the game).

said the Belgian coach during the post match press conference that denounced his SAFFC counterpart Richard Bok's "lottery" theory to their win.

A year later, however, saw the same story repeated for MTU, as they are commonly known, when they found themselves having to play in the second-tier of the Asian club competition after losing to Indonesian side, Sriwijaya. 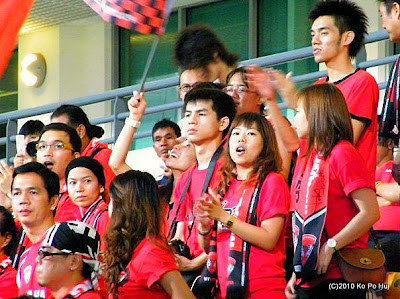 Will we see the return of "Muangthong Ultras" (pictured above)?

“Last year I didn't mind too much because we went on a good AFC (Cup) run (which MTU was one of the semi-finalists of last year's edition).”said blogger 'Greg' of 'The Thunderdome' (an unofficial MTU fan blog) in his opinion of last year's results.

“This time it was disappointing, and I do feel that a "one off" game away from home (where we lost on penalties away to Sriwijaya) doesn't seem fair. Still, we have to get over it and aim for another good AFC run.” while expressed his optimism for this season's campaign.

It's not hard to tell why that sense of the optimism can felt in Greg's words since the appointment of former Vietnamese national team coach Henrique Calisto (pictured above left, courtesy of "The Thunderdome") as the coach of one of the biggest clubs in Thailand.

Calisto was, after all, the mastermind that knocked Singapore out of the 2008 AFF Suzuki Cup at the old National Stadium and came with a big reputation in South East Asian football

“Yes, I think he'll do well for us.He knows the South East Asian game very well and his experience will help us." said 'Greg' whose blog is well known to English speaking football fans in Thailand.

"We had some real turmoil in pre-season and the previous coach, Carlos (Roberto Carlos de Carvalho), lasted about four weeks! But that's over and I'm sure Calisto will be here for far longer.” opined the expatriate who teaches Social Studies in Thailand. 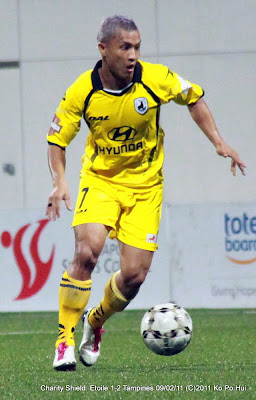 Being the only player in the Stags' squad that played against the defending Thais champions, Ahmad Latiff Khamarudin (pictured above) recalled:"They are a very organized team and technically good but their final end product lets them down when we played them last year.

"Still Thai teams are always good and fit." suggested the Tampines' star striker started for the Warriors on that night.

When asked what advice would he share with his team-mates for many whom are playing in continental tournament for the first time, a modest Latiff replied:"No, I did not give advice or tell anything to the players, as they by now should know a bit or more about the Thais players since they played the Thai teams last year and this year pre-season."
TICKETING DETAILS OF THE MATCH
This AFC Cup Group G clash will take place at Jalan Besar Stadium on 16th March at 7.30pm. Tickets are priced at $6 (adult) and $2 (student/senior citizen) and will be on sale from 6pm on match day at the stadium.
logged down by Ko Po Hui at 11:40:00