Not that long ago, I tweet something like this: "Instead of 'sponsor', should we be looking for 'strategic partners' for #sleague and clubs?"

And many of those replied said there ain't much different between the two, since both are the so-called financial providers or whatsoever. 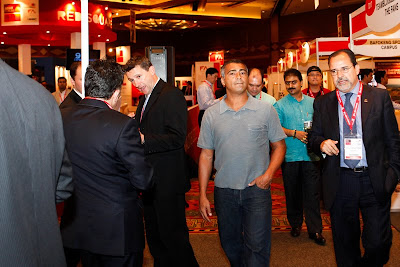 However, months back while attended the "Soccerex Asia" (pictured above where I met Romario there - see I was behind the legend!!), one of the panellists of one discussion group have this to say (if I remember correctly).

"It is about finding the right partner in marketing your product and one can't simply blame everything on English Premiership for the inability for not able to do that." he said.

I think the key word here he used was the word "partner" and not merely refer them as "sponsor".

Having a brief thought about it from someone who is not trained as a marketing person, I come to this conclusion that to me a "sponsor" is some corporate entities just pay a certain figure to have its logo pasted on the team's jersey front or any "A-sign" billboard, whereas a "strategic partnership" is having a two partners, on a level term, working hand in hand for the benefit of two parties.

The fact that how many clubs in the S.League and their financial backers actually work together to maximize the potential of their partnership?

Just take a look at the example below which I "screen-grab" from the Albirex Niigata (Singapore) website. 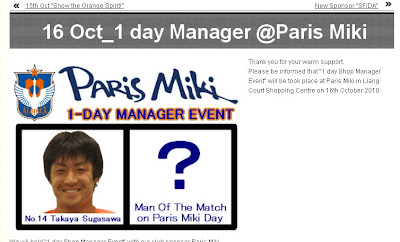 (Picture courtesy of Albirex Niigata [Singapore])
During October, Albirex Niigata and one of their sponsors, Paris Miki ran an event at one of the branches of the renowned optical chain which featured midfielder Takaya Sugasawa as "shop manager" for that day event (pictured above).

Now, think about it what is impact would it have for the White Swans and Paris Miki in such partnership?

First of all, the involved player got himself some exposure by making himself and his team known to anyone who might walk into shop to get a pair of glasses made, whereas Paris Miki themselves are keen to leverage the team's popularity among the Japanese expatriate community (after all, Albirex won the 2010's Fan Club of the Year Award, right?) to boast their sales. 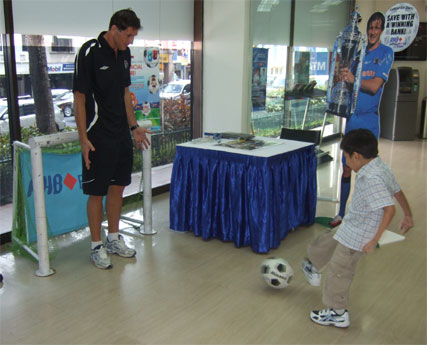 However, having said that how many times do we see such thing taken place? I think the one such event ever took place was somewhere two years ago at a RHB branch in Jalan Besar area where Tampines Rovers and national striker Aleksandar Duric made his appearance at the branch to promote the Singapore Cup (pictured above).

It's a win-win situation in a sense that player(s) can get to meet up and close with the fans and the unaware public at places like these, while the corporate entity would see this as an opportunity to publicize their product using alternative means like this (other than print advertisements and TV commercials ads).

In the end, it's all about maximize the mileage.. Isn't it?