(P.S: The copyrights of the video, images depicted in this blog entry belong to Nike, unless stated.)

Singapore (November 30, 2010) – For the first time, Nike allows football fans to be heard, loud and proud, at the Asean Football Federation Suzuki Cup 2010 games. Debuting at the games, Nike SHOUT is the region’s first digital LED perimeter board that serves to capture and amplify the football moments on pitch via social media, connecting Southeast Asian fans at home and across the region to the players on the pitch, live with their messages of support.

As part of the “Be the Next” campaign, Nike SHOUT is targeted at local youth footballers to inspire them to show their support for their national teams and strengthen their drive to be part of that team someday. Enthusiasts can post their words of encouragement and support and see their messages live on pitch during the AFF Suzuki Cup season which starts 1 December 2010.

Singapore is one of four ASEAN countries (Singapore, Malaysia, Thailand and Indonesia) activating the exchange via social media platforms – Twitter and Facebook. Official launch of the platforms commence 29 November 2010 and messages aggregated between the official launch date and the first live match will be selectively streamed on the Digital LED perimeter board on 1 December 2010 to support their national teams. Directions on use per platform outlined below.

A Youtube clip that captures the making of Nike SHOUT
Twitter Platform
Fans can post their words of encouragement from the period starting 29 November 2010 until the final match on 29 December 2010. 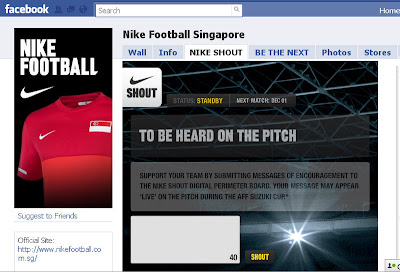 Fans who choose to use the Nike SHOUT app via Facebook (as "prt-scr" above) will be able to send their message of support from 29 November 2010 – 1 December 2010 and thereafter, one hour before the match and one hour post match time. The Nike SHOUT tab will be closed outside the stipulated time and fans are encouraged to continue voicing their support via Twitter.

**the Nike SHOUT tab is only available to fans who ‘liked’ the Nike Football Singapore page**
logged down by Ko Po Hui at 15:49:00