"Sorry Sir, the tickets are SOLD OUT." said the sales personnel over the counter as I was trying to buy the ticket for the Youth Olympic Games' football match on the 19th August.

It came at a time amid reports of poor ticketing sales that forced the games' organizers to close the gallery section of the Jalan Besar Stadium (pictured below), where all the football matches of the inaugural event were hosted. 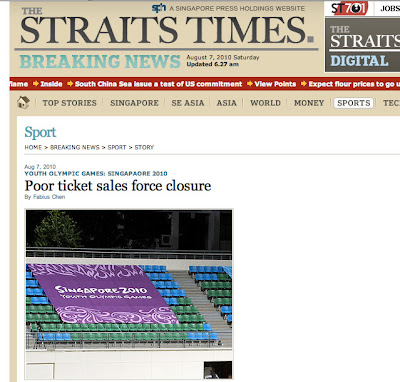 Prt-Scr of the news that the Gallery Section was shut down due to poor responce
The decision to “shut down” the gallery section proved to be an unpopular decision that it meant fans would have to fork out a higher price price to be seated at the covered “grandstand”of the 6,500-capacity stadium.

However, a sudden twist of event saw the surge of interest on the football tickets that it was announced that the tickets to matches involved the Singapore team in the preliminary round were “not longer available”. 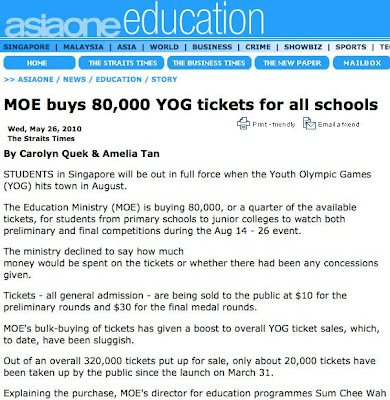 Prt-Scr of the news that MOE bought 80k of YOG tickets
I later then realized that there was this report that the Ministry of Education had buying “80,000 tickets for students from primary schools to junior colleges to watch the game” (pictured above) so as to “ensure that students here have the opportunity to support local and foreign athletes while enjoying the spirit of sports competition”.

And based on the account from the eye-witnesses at the opening game between Singapore and Zimbabwe that the large part of the 4,800 crowds at the arena were actually students.

Stringent, yet necessary, check at entrance saw many fans missed this goal...
“(The) mystery of sold out tickets (was) solved when whole grandstand was filled with 3/4 students, if nobody wanna buy ticks, at least the schools are doing a good thing to buy them and let their students go unless otherwise.” said one fan who was at the match, but missed the first goal scored by Ammirul Mazlan in the very first minute due to the “stringent security check” at the gates.

But he added, “The support was deafening, (and such a)long long (time, we have) no such (an) atmo(sphere) at jbs (Jalan Besar Stadium), just look at our Friday night games (that is telecast live) for eg of quiet matches”

Just as I thought I resigned to fate for not able to be part of the crowds on the 19th August, things took a sudden twist (again!) when I read this tweet post (pictured below). 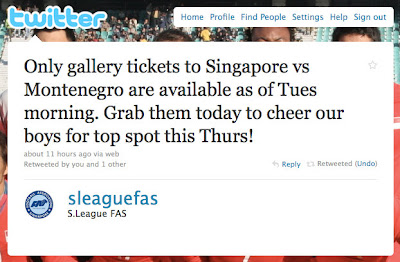 Wasting no little way, I logged on to the website via my iPhone to get the transaction done in the shortest space of time.

So I took the opportunity and asked the sales personnel what had actually happened.

"It's up to the ticketing system that they decided to release some for the public sales." replied the sales personnel regarding my query.

"As you can see for yourself (on the website), they (organizers) only stated 'AVAILABLE' without giving the actual figure they put up for sale." she added. 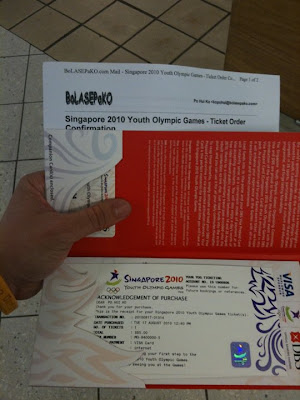 In the end, the whole saga is still so murky and mystical, perhaps, there are some things that should leave the way it's but the whole thing does left a bitter taste on what a mess they had created, yet managed to resolve it, well, more or less, whatever... 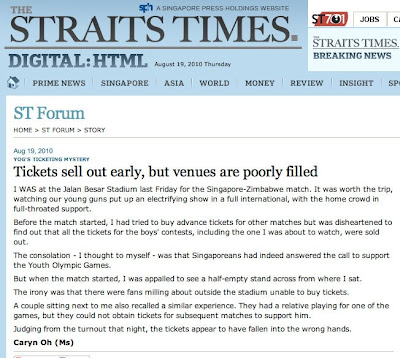 But I think I'm not the only one unhappy over about the handling of the ticketing sales, as you can see from the screengrab (pictured above) that a member of public wrote in the mainstream press to voice her concern on this issue.
logged down by Ko Po Hui at 06:30:00