Writing to the mainstream media

The leading up to and the days that follow after the game against Uzbekistan saw some of my letters being published on the mainstream papers. 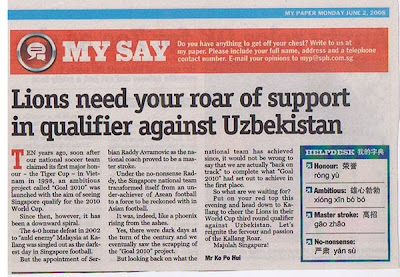 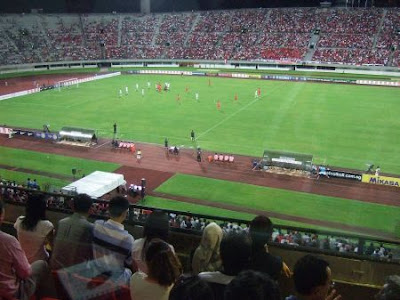 This time round, I voiced my opinion by saying it wasn't fair to "pin-point" the naturalized players only for the defeat. (Unfortunately, the guys at TODAY tweaked my line a little bit and somehow misnterpreted my views.. Sight! ). 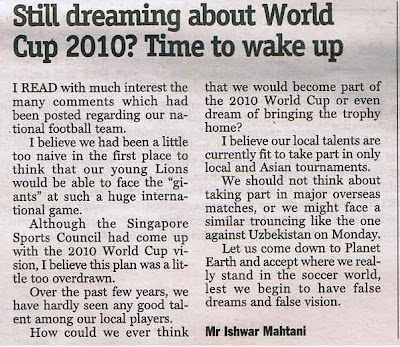 On the same day on "MyPaper", one honest chap gave his "wake-up" call to we all die-hard supporters (as depicted above).

Feeling a lump in my throat, I wrote in again (above, published on 9th June 2008) and "thank him" for his honest view.

Writing to the mainstream press can be a daunting task or bluntly saying it is a "waste-your-time" thing to do.

Countless time, I wrote to the mainstream press (regarding other issues), hoping to have my views seen and discussed but countless time, my letters were dumped into the basket.

If some of you guys are regular followers of these so-called "feedback" pages of the papers, you might noticed one or two "regular writers" (example a Mr Law, a Mr Leong and a guy named after a card of a poker card.) - are these guys' views really struck a chord with the masses that most editors would use them?

Not only that, probably the more stupid things that would appeared in these columns are some of those "kucing kurap" (insignificant, trivial)matters like once a house owner complained she was mistaken as a maid by a civil servant (C'mon, don't waste our @#$%& time on this kucing kurap matter.)

Although, I'm disappointed with the treatment by the mainstream folks on local football, however at this point of time, they are still essential to get the message across.. SIGHT!!
logged down by Ko Po Hui at 23:16:00