[Annual Review] "How is S.League?"

"How is S.League?"asked a colleague whom I chanced upon months ago.

I replied:"If you ask this question, it would mean I didn't do my job properly,

"It means somehow the league itself and its relevant information did not reach out to the wider audience they intended to."

"Should have it done so, you would not ask me in the first place, isn't it?" I added.

Another ice-breaker conversation that took place not long ago went like this after a day's work.

"So Bishan stadium plays host for Home United (games), isn't?" queried by another colleague of mine

"Sorry lah, I don't quite follow the S.League, I just being confused lah." replied this colleague in an apologetic tone.


No worries, small chats as such are not uncommon since those guys are aware of my involvement with the local scene, although these can be pretty nerve racking when the conversation can't proceed further other than staying put on the negative side of things and those icebreakers.

After all, what can be more intriguing than to discuss in depth on those negativities than singing praise on those who did well in local football (admit it)?

What can be more pathetic when we harping on issues that are problems still looking for viable solutions (and you know which are those I referring to)?

Nonetheless, those perceived negativities did not deter the league authority from keeping assuring the skeptic masses things are on right track with the proclamation that the league attendance risen 45% as compared to last year.

Whether if that figure is too good to be true is up to individual to decide, although, honestly speaking, most of the matches I attended this year looked not different from the past (or maybe those matches I went to were poorly attended).

In between the just concluded season, various initiatives were undertaken by the league authority to entice the fans to turn up such as the "Win-A-Car" contest, the "S.League Teddy Bears" and probably the most "out-the-box" of all - the distribution of the potato chips to residents at home to draw them to the stadiums.

I am not sure if the league authority isn't showing much faith in their own product that they decided to bank on some external factors to market the league on their behalf.

Had we not told to retain ticket stubs of certain "glamorous" matches to gain complimentary entry to some S.League matches?

The point is - why the league look so cheap and desperate with those "lobang".

Such a lack of faith was illustrated in a recent promotional poster for the so-called "Football Extravaganza" (pictured below and reproduced with permission) that drawn brickbats from many supporters. 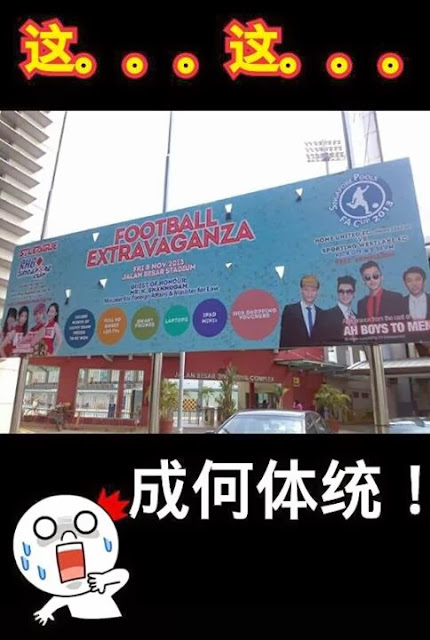 Meant to be a tool to draw awareness for the double-header on that 8th of November "red-letter" date which featured both FA Cup and Singapore Cup finals, the poster did not place emphasis on the main theme (i.e.: the teams, the players or even the trophies).

Instead, the images of the cast from an old movie and a group of cheerleaders were placed prominently on the poster that offered little hint that it was a football event going to take place.

Whether the objective of the poster was the result of thinking "out-the-box" to be bold and different, I would say such a "stunt" should be minimized at the lowest.

Of course, there's nothing wrong to be bold and innovative in any initiative but when the first impression cannot drill home the message, immediate remedy should be put in place.

This incident was just one of the too many that taken place in the past 12 months when I mentioned last December we should judge S.League CEO Lim Chin's work at this juncture.

Has the former Chief of Artillery delivered? I think this review has answered.

Email ThisBlogThis!Share to TwitterShare to FacebookShare to Pinterest
Classifed as: Annual Review, S.League