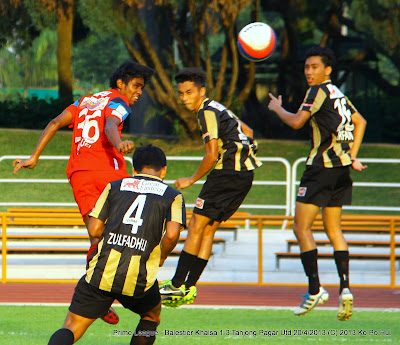 The visitors walked away with a 3-1 win over the hosts whom being the defending champions have not able to get off to a good start in their title defending campaign.

Under the scorching encounter saw a rather evenly-matched first 45, before the floodgates opened in the second half to see the Jaguars wrapped up all three points, although a free-for-all in the same half saw them reduced to ten men.

Glad the lightning was alright, despite the movement of the clouds that resulted the forming of shaded, thus caused the frequent changes in the camera setting. Coupled Tampines Rover's loss a day earlier in Vietnam, the 2-0 defeat suffered in the hands of Sumatran club Semen Padang by defending Singapore Cup holders Warriors in the AFC Cup Group E fixture had confirmed the exit of both Singapore clubs from the continental second-tier club tournament.

With those result confirmed, it means for the second time in tournament history (Geylang United in 2010) will not see any participating club from the Republic qualified to second phrase of this tournament with Geylang United and Home United being the semi-finalists in the founding year back in 2004.

Always a challenge to snap shots when both are outfitted in darker attire, but it's can be more or less compensated with the position of the spot, although having a risk to not having more shots if actions are to be at the other end, etc. 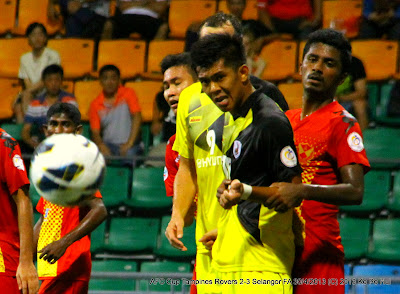 2013 has been a bad year for Singapore football to this stage to speak for.

The vision to build on the AFF Suzuki Cup win just months ago seems to be diminished with the crashing out of both Tampines Rovers and Warriors FC from the AFC Cup, which used to be local club's playground in the past (to the second round, at least).

Questions asked would be - has others improved or we are contented of what we are?