Can Stange work with Syllabus?

Looking back to the events leading to the announcement of the new Singapore national football team coach Bernd Stange this evening at Jalan Besar Stadium is anything but surprising.

It's not because the identity was already made known days or weeks earlier, in fact, the name of the German coach started to trickle in after lunchtime when various social media platforms having hints suggested the former Iraqi national coach would be the Raddy Avramovic's replacement.

And with the scheduled press conference lining up to officially unveiled the identity of coach Stange seems redundant when the broadsheet “The Straits Times” decided to break the news instead, when they tweeted the news at 1655hrs (as illustrated) to confirm the appointment. 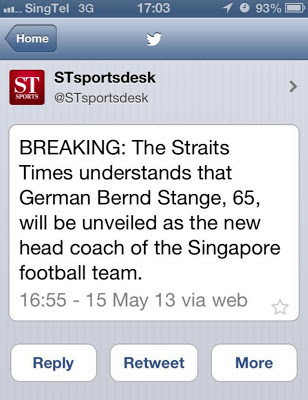 Following that the name “Bernd Stange” seems to trigger the curiosity of those in the local football fraternity with various postings surfaced related to his background and appointments prior taking the post in Singapore.

With several jokingly suggested that Bundesliga clubs' recent success in the Champions League, the recruitment of the 65-year-old as the Lions' coach could see local football heading to the right path after clinching the AFF Suzuki Cup last December.

Whether or not is he able to deliver what he's being assigned to, coach Stange must be mentally prepared to see the difficult tasks ahead for him when the developing pool is so concentrated with the lack of pluralism could see his work met with some obstacles.

Also not forgetting what another newspaper, TODAY, suggested on 20th April that “Will he (coach Stange) endorse what has already been thought out and in place, chiefly the National Football Syllabus launched in 2010.” citing the one of the cornerstones of the “Strategic Plan”.

Which, of course, imply how close coach Stange is ready to work hand in hand with the author of the syllabus, FAS Technical Director Slobodan Pavkovic whose role is, of course, help to lay down the groundwork to ensure the conveyor belt is well oiled to product enough footballing talents for the country that seems to hit the kerb in recent years.

“While I recognize that the task ahead will not be easy, I am confident and I believe my experience at the international level and contacts in the game will be an asset to Singapore football. I understand the constraints and challenges faced by the national sports associations in Singapore, including FAS, and I urge all stakeholders to support us and work together as a team as we strive to optimize our resources and maximize our success. I am looking forward with excitement to playing a role to further develop football in this beautiful country.” said Coach Stange in the news report published on the official FAS site that announced his appointment.

With those words, we hope the German tactician is well-prepared for the tasks ahead and not to forget this – Welcome to Singapore, Coach and Good Luck.
logged down by Ko Po Hui at 22:13:00