Jonathan and Guntur propelled Wolves to the League Cup

With goals from former S.League players Jonathan Xu and Guntur Djafril in each half coupled the late strike by Haziq Sudhir that hammered the last nail to the coffin, NFL Division Two side Admiralty FC secured the last ticket to the Starhub League Cup by staging an upset over Singapore Recreation Club (SRC) of Division One with 3-1 scoreline at the Jalan Besar Stadium.

Little would expected from the Wolves decked in black outfit when they conceded a goal in 20th minute that witnessed Shaiful Fauzi placed the Padang side on the pole position in the Playoff Final that saw the two finalists emerged after shrugging off their opponents last week on the same ground.

Following the playoff final, Admiralty were made known of their fate in the "Heartlanders Cup" with the draw that was immediately conducted at the VIP Lounge of the stadium in the presence of the VIPs, representatives and supporters from most of participating clubs.

Joining them in the Group A are Harimau Muda (seed team), Woodlands Wellington and Home United with defending Cup holders Brunei DPMM are seeded in Group D alongside Balestier Khalsa and Warriors FC.

While the rest of the teams were drawn into other groups as illustrated below. 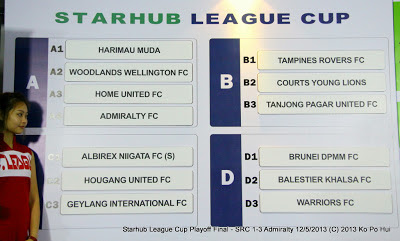 The 2013 StarHub League Cup will be kicking off in June and details of the fixtures will be released in due course.

(Additional details extracted from the media release issued by S.League SBU)
logged down by Ko Po Hui at 21:14:00