Having an "OPEN" concept will do no harm for all...

"I always believe such cooperation between clubs and their locality GROs (Grassroots Organization) will do more good than anything. Both parties should leverage on the plus sides of each other to benefit themselves in the long run. And this is something I hope the "joint event" this afternoon is not a "one-off" event."

That was what I said on the blog FB page in respond to a member's posting on the "SAFFC Warriors Football Carnival 2012", which was held in Choa Chu Kang (CCK), before heading down there. 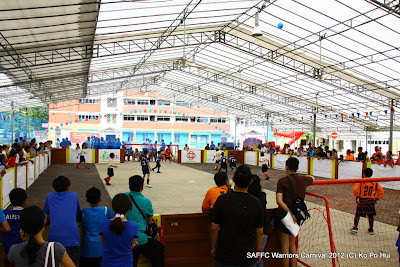 The choice of the venue was ideal with the event took place just right across the "Lot 1 Shopping Center" that made it lot easier for people to take notice and travel to and fro the Choa Chu Kang MRT station next to the mall.

In conjunction with the SAFFC's pre-season media press conference, a futsal tournament for the regional schools was organized in a fun-filled afternoon in part of the club's community outreach in their based locality.

"Following this afternoon carnival, the club will be taking part in a sports carnival organized by the grassroots organization in June." said Ms Jorine Sim, Manager for Marketing & Corporate Affairs of SAFFC as she shared with this blog the upcoming collaboration between the Warriors and the regional GROs.

"As compared to the past, we are happy to see these organizations being more open to the ideas of such collaboration and there are plans for utilizing social media platforms, such as "Facebook", to publicize these upcoming events." she added.

This afternoon event by the Warriors is the result of the "de-centralization" move by the league authority to see clubs conduct their own outreach programs on their own with Gombak United, Hougang United, etc. concluded their own in the past recent days.

It is indeed a move welcome by Warriors custodian Shahril Jantan who shared his thoughts after the event.

He said:"Today, I signed more autographs in three hours and seen much more new faces at the fanfare at the Warriors hometown in CCK than the past three years that were held in town and other locations."

"De-centralised (fanfare) should be the way to go as it means SAFFC are targeting residents of CCK, Bukit Panjang, Teck Whye area, etc.

"Also there has to be continuity in such engaging with the fans that I think once a year is never enough." added the former national 'keeper.

As what I quoted earlier "such cooperation between clubs and their locality GROs will do more good than anything" as it would help foster better community relationship within the vicinity and having the sense of belonging many clubs long hope to instill in those largely untapped potential fan base.

PLEASE CLICK HERE TO SEE THE REST OF THE PICTURES
logged down by Ko Po Hui at 20:18:00