"MINI MANILA"
I'm not sure how that sentiment started in the first place, but judging by the posting plastered online and heard from the grapevine, it seems that JBS would turn out become a "mini Manila" for the friendly fixture between Singapore and The Philippines. 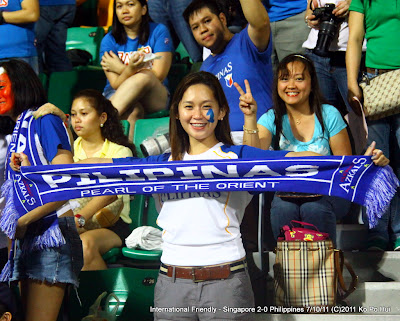 True enough that majority turned out for the game were the expat Filipinos.

Just like most of the matches played earlier that involving any foreign team in recent months, the Pinoys were all in unison rhythm and voice (most of the time) that rocked the normally subtle JBS.

THE MATCH
Honestly speaking from my perspective that both sides lacked the firepower upfront during the first half of the match.

While the Filipinos looked nippy at times on the flanks, but the combination of Daniel Bennett and Safuwan Baharudin did well to ward off the dangers, although the visitors did look one-dimensional in much of their offense (playing split defense passing that failed to unsettle the Lions backline).

However, much of credit much goes to Hariss Harun in adding that calmness in the middle in the park that was sorely missed in the last qualifiers against China and Iraq.

The second half had the Lions kept status quo in remained as composed in quest of breaking the deadlock amid a resilient Azkal's defense that eventually came in the 51st minute when Shaiful Esah's deflected shot opened the account of the night.

Veteran striker Aleksandar Duric broke the hearts of the largely expat crowds when he outran his much younger marker to slot the ball past a hapless Neil Etheridge minutes later to seal the game for the hosts.

Speaking at the post-match press conference, Lions' Coach Raddy Avramovic said: “I looked at this game as continuity from the two excellent matches against Malaysia, and I hoped that in this game, they will give us more confidence and belief in ourselves for the match against Jordan.’’

"In the first half, our attacks were cut from midfield and we couldn’t keep possession in the opponent’s half. And when you can’t do that, you cannot create chances, we then changed the positions of a few players during the break, and the team looked a lot better.” added the Serbian tactician

Azkals' coach Hans Weiss paid tribute his players who had to travel from Europe and other countries to play in this International Friendly. He added “They were tired and jet-lagged but they played well despite that fact. We were compact in the first half and played quite ok.”

“I warned my players of Singapore’s set pieces as they have a few variations and we were punished by Singapore’s No.3 Shaiful Esah. But we had a couple of chances in the second half but it was not enough.” said coach Weiss on thoughts of the first goal conceded by his team.

JUST LIKE 'WESTLIFE' CONCERT
Nonetheless, to the largely Filipinos crowds the result meant secondary when it was a chance to get up close to their sporting idols who flew in for this international friendly. 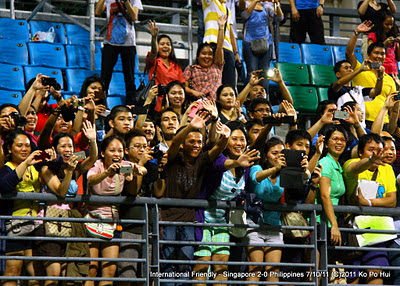 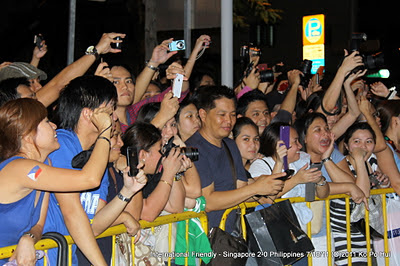 Resembled any scene of a pop concert, screams from adoring fans were deafening the moments of the Azkals made their way out of their dressing room to their waiting coach.

Just a friend who remarked,"Are we at a 'WESTLIFE' concert?"

(Quotes from the coaches extracted from the FAS media release issued after the game.)
logged down by Ko Po Hui at 23:45:00