Singapore's dream in tatters (and more than that)...

Things just don't look that good when we conceded a goal within the first 15-minute slot that saw Abdallah Deeb scored to give the Jordanian the lead, when the Lions barely find the momentum upfront with some misguided balls that strayed away needlessly.

Few chances that came across following that setback with defender Safuwan Baharudin's "out-of-nowhere" header from close range nearly leveled the scores in the 35th minute or so, but the scores stayed that way at the end of the first 45 minutes.

Like their Iraqis counterparts, the Jordanians show no awkwardness on plastic surface, despite the earlier grouse by their coach Adnan Hamad over the surface like Zico did earlier.

It is clear that the Middle-Easterners being the more dynamic side and undeniable deserved the win more than we do.

With two more goals that came in the second half as the result of swift attacking plays from the visitors, it all but over for the Singapore dream in their World Cup quest.

Yet this defeat at home is more than just a loss of chance to make it to the greatest show on earth, but it is a huge gamble that backfired in the expenses when we are trying to pick up the pieces at our own backyard. 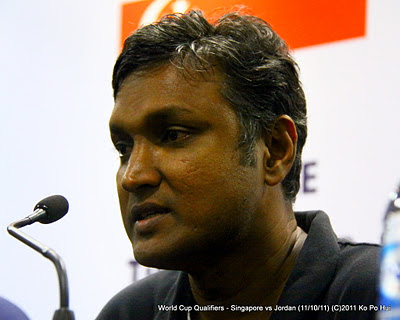 Speaking at the post-match press conference, Assistant Coach V.Sundramoorthy (pictured above): “I think we did not take our chances and it is important at this level to convert chances when you have them. I think with time, with these young boys, we have a future. We have three games left and mathematically, if we get maximum points from the remaining games, we will still have a chance.”

Adding on, he said:“We are developing this team and they are a young team. We started the game positively and should have minimised our mistakes. The players fought till the end and they tried their best.” 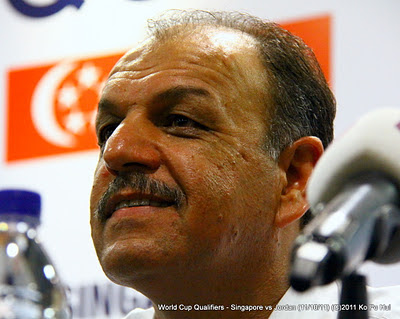 Jordan’s Head Coach Hamad (pictured above) said: “I am very happy that the team played well and got a good result. And we are closer to the fourth round now. We respect the Singapore team and that’s why we played a good game. The players deserve the result.”

(Quotes extracted from the FAS media release shortly after the match)

PLEASE CLICK HERE TO SEE THE REST OF THE MATCH PICTURES.
logged down by Ko Po Hui at 23:20:00