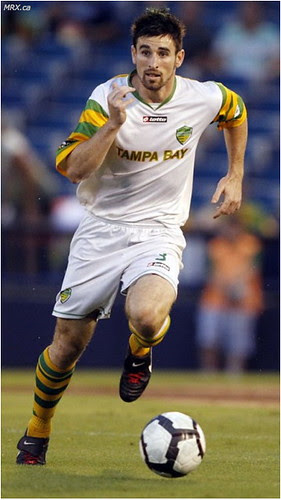 Together with Balestier's Lim Young Woo, Tatters was here for the centralized trials organized by FAS back in last November and were the only two out of the 19 players (to this date) being offered a contract to play in the S.League.

The 26 year-old first started his senior career with Wilmington Hammerheads in the United Soccer Leagues Professional Division (the third tier of the American Soccer Pyramid) before heading back to his place of birth to play for Elgin City in the Scottish Third Division in 2009, having played his collegiate soccer for University of North Carolina at Charlotte.

Youtube Clip of Tatters in action
The utility man last played for FC Tampa Bay in the North American Soccer League (one tier below Major League Soccer) before arrived in Singapore.

Noted for his no-nonsense approach, inexhaustible Tatters has ability to shackle opposing strikers with his one-on-one defending and his aerial strength as well.

And because of those factors, he is able to provide extra attacking options to his team with those balls he delivers into the penalty area for his team mates upfront, according to the CV made available to the media.

Alongside with Tatters, FMI-TSI has already successfully placed the two other players in the upcoming S.League season. They are Lim Young Woo (signed for Balestier Khalsa) and Lebanese international Mounier Raychouni who also set to start for the Rams.

"We would like to state our appreciation to both Woodlands Wellington and Balestier Khalsa for showing faith in those players we scouted for the new season." said Mr Bryan Lim, the Sporting Director of FMI-TSI.

"Although we are not really that satisfy with the low take-up rate of our players, which I hope with better luck and timing that things will pick up in the near future." added Lim.